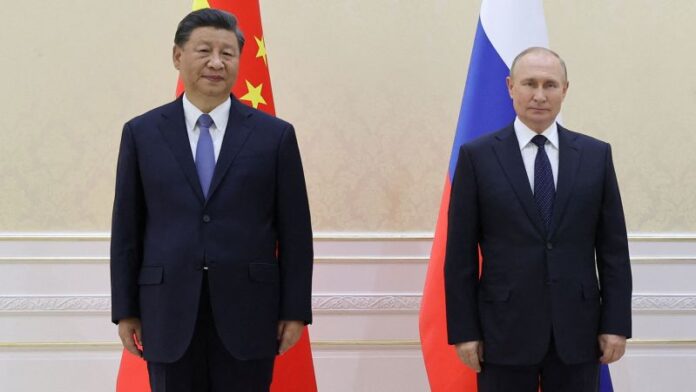 Xi Jinping and Vladimir Putin are scheduled to speak Friday via video conference, the Kremlin said, with analysts watching for any sign of a softening in the Chinese leader’s support for the Russian president after more than 10 months of war in Ukraine and as China faces an unprecedented Covid outbreak.

The two leaders will primarily discuss bilateral relations between their countries, and exchange views on regional issues and their strategic partnership, Kremlin spokesperson Dmitry Peskov said on Thursday.

Moscow and Beijing have drawn closer in recent years, with Xi and Putin declaring the two countries had a “no limits” partnership weeks before Russia invaded Ukraine in February.

China has since refused to condemn the aggression, instead repeatedly laying blame for the conflict on NATO and the United States – and remaining one of Russia’s key remaining supporters as it grows increasingly isolated on the world stage.

But more than 10 months into the grinding war, the world looks much different – and the dynamic between both partners has shifted accordingly, experts say.

Instead of an anticipated swift victory, Putin’s invasion has faltered with numerous setbacks on the battlefield, including a lack of basic equipment. Morale within parts of Russia is low, with many civilians facing economic hardship during the bitter winter.

On Thursday, Russia launched what Ukrainian officials described as one of the biggest missile barrages since the war began in February, with explosions rattling villages and cities across Ukraine, damaging civilian infrastructure and killing at least three people.

Ukrainian officials have been cautioning for days that Russia is preparing to launch an all-out assault on the power grid to close out 2022, plummeting the country into darkness as Ukrainians attempt to ring in the New Year and celebrate the Christmas holidays, which for the country’s Orthodox Christians falls on January 7.

“China is eager for (the war) to end,” said Yun Sun, director of the China Program at the Washington-based think tank Stimson Center.

“Xi will try to emphasize the importance of peace to Putin,” she added. “As Russia is getting impatient with the lack of progress on the battlefield, the timing is ripening for peace talk in China’s eyes.”

China, too, is growing more isolated in its stance toward Russia, said Alfred Wu, associate professor at the Lee Kuan Yew School of Public Policy at the National University of Singapore.

Though India has not condemned Moscow’s invasion outright, Modi told Putin in September that now was not the time for war and urged him to move toward peace.

That shift means China now stands further alone in its relationship with Russia, another reason Xi could be eager to see a swift resolution, Wu said.

Xi had already shown hints of impatience when he last met with Putin in September at a regional summit in Uzbekistan. At the time, Putin conceded Beijing had “questions and concerns” over the invasion, in what appeared to be a veiled admission of their diverging views.

But, experts say, China’s domestic situation has also changed significantly in the months since, which could necessitate a different approach to Putin this time around.

The country is currently fighting its worst-ever Covid outbreak after finally abandoning its stringent zero-Covid policy, with restrictions loosened and borders partially reopened. The U-turn came after an unprecedented wave of protests across the country in opposition to zero-Covid – in some cases expanding to include broader grievances against Xi and the ruling Communist Party.

At the center of this crisis is Xi – who entered a norm-breaking third term in October, with a tight grip on power and a close circle of loyalists.

“Now with domestic issues out of the way, Xi is in a better position to work on Russia,” said Stimson Center’s Sun, referring to his consolidation of power in October.

She added that trade between the two countries had increased this year due to high energy prices globally – and the two leaders could “reaffirm their vows to cooperate economically.”

However, Wu said, the protests, Covid outbreak and consequent economic toll have placed Xi in a more vulnerable position that could mean less material and public support for Russia.

“The policy tools Xi Jinping can use to support Russia is quite limited now, it’s quite constrained,” said Wu. “Politically, domestic support for Xi has declined dramatically. His third term does not actually start with a rosy picture.”