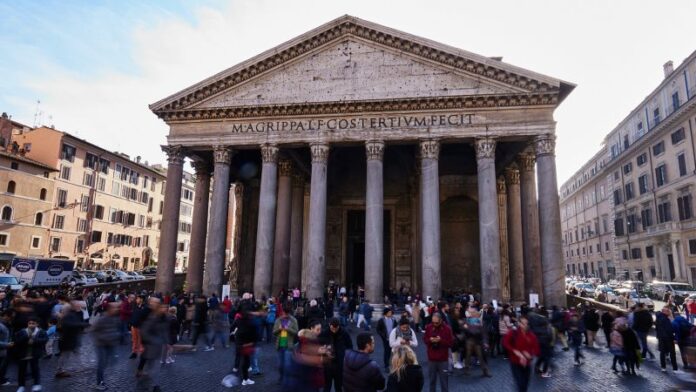 A version of this story appeared in CNN’s Wonder Theory science newsletter. To get it in your inbox, sign up for free here.

Welcome to a new year, where fresh wonder already awaits.

Rome has often been called the Eternal City. Ancient Romans took pride in their metropolis and viewed it as an unshakable pinnacle, and poets such as Virgil and Ovid made similar references in their works to perpetuate this idea.

The imperial capital’s revolutionary buildings served multiple purposes, and even those that have faded over time enjoy new life, thanks to conservators and archaeologists — and our enduring fascination.

The Pantheon still stands as one of Rome’s long-lasting marvels. Its oculus opens to the sky like the eye it was named for, letting in both sunlight and drenching rain. Standing beneath the wonder, you can almost feel the world turn.

The ancient building still holds many secrets, but researchers might have just unraveled one of them.

Sporting the world’s largest unreinforced concrete dome, the Pantheon was one of the architectural feats of the ancient world, and its prestige remains to this day.

More than 2,000 years after the temple was built, the majestic building and other Roman concrete structures like the Colosseum and aqueducts continue to stand tall.

In contrast, modern concrete can crumble in just decades. So how did the ancient Romans do it?

New research suggests that their innovative concrete mixture — a Roman invention — included a mystery ingredient. Reviving the use of the unassuming white chunks in the concrete could make today’s cement more sustainable.

If you’re setting healthy resolutions for yourself this year, don’t forget to include your pet, too. Cats and dogs need exercise just like people do.

Dogs benefit from two daily walks, which give you a chance to enjoy some fresh air right along with them. Cats can get their zoomies in while playing with interactive toys.

Get ready for a year filled with exciting space missions and exploration like never before.

The four-person crew of the Artemis II mission, which aims to circle the moon in 2024, is expected to be announced within the next few months.

The European Space Agency plans to launch the Jupiter Icy Moons Explorer mission in April. The goal is to investigate whether the oceans of Jupiter and three of its icy moons could support life.

The highly anticipated samples collected in 2020 from the asteroid Bennu by the OSIRIS-REx mission are set to arrive on Earth in September. And the Psyche mission’s launch window opens in October to send a spacecraft to visit its namesake asteroid — a purely metal world that’s entirely unexplored.

Direct evidence of prehistoric clothing is hard to find, but archaeologists in Germany discovered cut marks on a cave bear paw that suggest the animals were skinned for their fur.

A cave bear was about the size of a modern polar bear, and the species went extinct about 25,000 years ago. The hefty animal’s thick fur would have provided early humans with the right amount of insulation from the elements.

The Schöningen site, where the paw was found, is also where some of the oldest known wooden weapons have been discovered.

Hedwig, is that you?

A rare snowy owl has taken up residence among the palm trees in Southern California. The striking raptor, native to the Arctic tundra, was first spotted in Cypress, California, in mid-December — and bird-watchers have been flocking to see it, sometimes traveling for hundreds of miles to catch a glimpse of the “astonishing” sight.

Snowy owls can be found in northern Canada, but typically the southern limit for their winter migration is the northern United States.

Experts aren’t sure why or how the captivating bird popped up in sunny SoCal, but they have a few theories about how the owl’s migration got off track. For now, all signs point to the bird being healthy and eating well during its West Coast visit.

Here are more stories that captured our attention:

— Astronomers have shared a new glittering image of the tail end of the Serpens constellation, where stars are born.

— A wildlife rehabilitator nursed more than 1,600 frozen bats back to health in her attic after many fell from their roosts beneath Houston’s bridges during December’s arctic blast.

— Ice age hunter-gatherers may have used lines, dots and other symbols on cave walls to communicate with one another in an early form of writing — and it might have been similar to the way we use emojis.