What is Orthodox Christmas, and why is it in the spotlight this year? 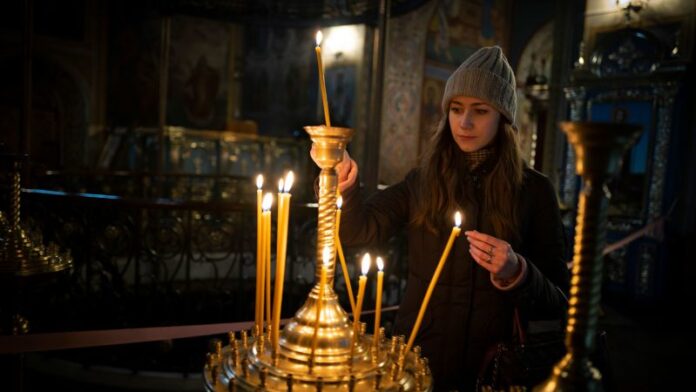 For much of the Western world, Christmas is celebrated on December 25, according to the Gregorian calendar. Yet in a distinction that dates back centuries, Orthodox Christians follow the Julian calendar and mark the festival on January 7 instead.

Orthodox Christmas – and the long-standing rift between the Russian Orthodox Church and other Orthodox groups – has been thrust into the spotlight this year by Russian President Vladmir Putin’s call for a temporary 36-hour ceasefire in Ukraine to allow Orthodox followers to attend Christmas services. Putin’s proposal was swiftly dismissed as “hypocrisy” and “propaganda” by Ukrainian officials, and shelling has continued from both sides.

Orthodox Christians are estimated to number between 200 and 300 million people globally. Majority-Orthodox countries include Russia, Ukraine and Greece, whose churches are part of the Eastern Orthodox branch, which is also followed by the majority of Christians in the Middle East. There are also significant Orthodox communities in Egypt and Ethiopia, most of whom belong to the smaller Oriental Orthodox branch.

Prior to Russia’s full-scale war on Ukraine, Kyiv had been pushing to establish its own independent Orthodox Church separate from Moscow, and the schism only widened in the wake of Putin’s invasion last year. In October, a branch of Ukraine’s Orthodox church announced it would allow its churches to celebrate Christmas on December 25, rather than January 7.

As Orthodox Christmas falls on Saturday, here are answers to some of the key questions.

Dispute within the Christian faith over when to officially recognize the birth of Jesus Christ dates back centuries.

Pope Gregory XIII in 1582 decided to standardize Christian holidays with the introduction of the Gregorian calendar, which put the birth of Jesus Christ as December 25. The Orthodox Church split into its own branch of Christianity during the Great Schism of 1054, following years of increasing tensions over religious and political differences.

As a result, Orthodox Christians chose not to adopt Pope Gregory’s new calendar and continued to adhere to the Julian calendar.

In recent years, a large part of the Orthodox community in Ukraine has sought to distance itself from Moscow.

The movement was accelerated by the conflict Russia stoked in eastern Ukraine beginning in 2014 and strengthened further in 2018, after Patriarch Bartholomew I of Constantinople – a Greek cleric who is considered the spiritual leader of Eastern Orthodox believers worldwide – endorsed the establishment of an independent Orthodox Church of Ukraine and revoked a centuries-old agreement that granted the Patriarch in Moscow authority over churches in the country.

In January 2019, Bartholomew signed a decree called a “tomos” that officially granted independence to the Orthodox Church of Ukraine. This severed the church’s centuries-long ties with the Russian church.

Patriarch Kirill of Moscow, the head of the Russian Orthodox Church, which has become closely entwined with the Russian state under Putin, responded by cutting ties with Bartholomew. The emergence of a church independent of Moscow has infuriated Putin, who has made restoration of the so-called “Russian world” a centerpiece of his foreign policy and has dismissed Ukrainian national identity as illegitimate.

Russia’s invasion of Ukraine in February 2022 has exacerbated the divide between the two countries’ Orthodox churches and highlighted fundamental ideological differences.

In May 2022, a branch of Ukraine’s Orthodox Church that had remained loyal to Moscow after the 2019 split announced it would break with the Russian church over the invasion of Ukraine.

The leaders of the branch, known as the Ukrainian Orthodox Church (UOC), severed ties with Moscow after Kirill gave his support to the war and put the church firmly behind Putin. Even before the decision on May 27, 2022, more than 400 parishes had already left the UOC-Moscow Patriarchate in the aftermath of the invasion.

Kirill remains outspoken in his support of Russia’s invasion, announcing in a sermon in September 2022 that Russian soldiers who die in the war against Ukraine will be cleansed of all their sins. “He is sacrificing himself for others,” he said. “I am sure that such a sacrifice washes away all sins that a person has committed.”

In a surprise move on Thursday, Putin ordered his defense minister to implement a temporary ceasefire in Ukraine for 36 hours. The president’s order came after Kirill called for a ceasefire between January 6 and January 7 to observe Orthodox Christmas.

The announcement was met with heavy skepticism from the Ukrainian side and immediately dismissed by Kyiv.

During his nightly address Thursday, Ukrainian President Volodymyr Zelensky said Russia aimed to use Orthodox Christmas “as a cover” to resupply its forces and stop Ukrainian advances in the eastern Donbas region.

Ukrainian presidential adviser Mykhailo Podolyak responded to Putin’s move by saying that Russia must leave “occupied territories” in Ukraine before any “temporary truce.”

“Keep hypocrisy to yourself,” Podolyak tweeted. The adviser later described Putin’s order as “purely propaganda,” adding: “There is not the slightest desire to end the war. Especially, let me remind you, that only Russia attacks civilian targets with missiles/drones, including places of religious worship, and it does so precisely on Christmas holidays.”

The proposal for a temporary truce also raised eyebrows among the international community.

US President Joe Biden expressed skepticism on Thursday, telling reporters that he was “reluctant to respond to anything Putin says. I found it interesting. He was ready to bomb hospitals and nurseries and churches on the 25th and New Year’s.”

On Friday, the conflict in Ukraine continued after the proposed start time of the ceasefire at noon Moscow time (4 a.m. ET), as CNN teams observed incoming and outgoing artillery fire around Bakhmut, eastern Ukraine.