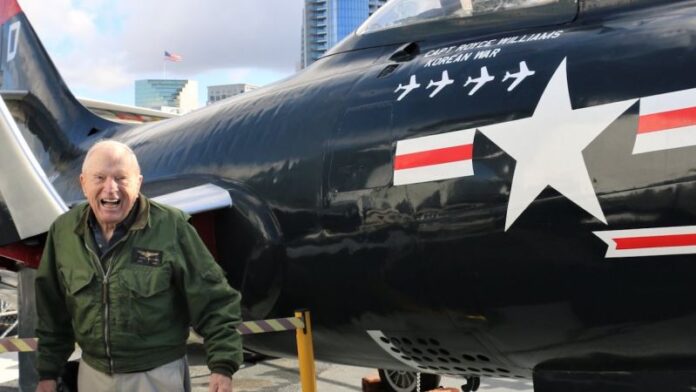 Royce Williams was a real life “Top Gun” 10 years before Tom Cruise was even born.

On a cold November day in 1952, Williams shot down four Soviet fighter jets – and became a legend no one would hear about for more than 50 years.

The now 97-year-old former naval aviator was presented with the Navy Cross, the service’s second-highest military honor at a ceremony Friday in California.

Navy Secretary Carlos Del Toro said on Friday that among the many proposals he has reviewed to upgrade sailors’ awards, Williams’ case “stood out above all others. It was very clear to me that his actions were truly extraordinary and more closely aligned with the criteria describing a higher medal.”

“Freedom does not come cheap,” Del Toro said. “It comes through the sacrifice of all those who have and continue to serve in today’s military. Your actions that day kept you free. They kept your shipmates free in Task Force 77. Indeed, they kept all of us free.”

Here’s what Williams did to earn that honor.

On November 18, 1952, Williams was flying the F9F Panther – the US Navy’s first jet fighter – on a mission during the Korean War.

He took off from the aircraft carrier USS Oriskany, which was operating with three other carriers in a task force in the Sea of Japan, also known as the East Sea, 100 miles off the coast of North Korea.

Williams, then age 27, and three other fighter pilots were ordered on a combat air patrol over the most northern part of the Korean Peninsula, near the Yalu River, which separates North Korea from China. To the northeast is Russia, then part of the Soviet Union, which supported North Korea in the conflict.

As the four US Navy jets flew their patrol, the group’s leader suffered mechanical problems and with his wingman, headed back to the task force off the coast.

That left Williams and his wingman alone on the mission.

Then, to their surprise, seven Soviet MiG-15 fighter jets were identified heading toward the US task force.

“They just didn’t come out of Russia and engage us in any way before,” Williams said in a 2021 interview with the American Veterans Center.

Wary commanders in the task force ordered the two US Navy jets to put themselves between the MiGs and the US warships.

While doing this, four of the Soviet MiGs turned toward Williams and opened fire, he recalled.

He said he fired on the tail MiG, which then dropped out of the four-plane Soviet formation, with Williams’ wingman following the Soviet jet down.

At that point, US commanders on the carrier ordered him not to engage the Soviets, he said.

“I said, ‘I am engaged,’” Williams recalled in the interview.

Williams said he also knew that because the Soviet jets were faster than his, if he tried to break off they’d catch and kill him.

“At that time the MiG-15 was the best fighter airplane in the world,” faster and able to climb and dive quicker than the American jets, he said in the interview.

His plane was suited to air-to-ground combat, not aerial dogfights, he said.

But now he was in one, with not just one, but six Soviet jets as the other three MiGs that broke off earlier returned.

What ensued was more than a half-hour of aerial combat, with Williams constantly turning and weaving – the one area where the F9F could compete with the Soviet aircraft – to not let the superior MiGs get their guns fixed on him.

“I was on automatic, I was doing as trained,” he said.

So were the Soviets.

“But on some occasions … they made mistakes,” Williams said.

One flew at him, but then stopped firing and dipped under him. Williams figured its pilot was killed by his gunfire.

And he described how another MiG got right in front of him, he hit it with his gunfire, and it disintegrated, causing Williams to maneuver sharply to avoid the wreckage and its pilot as the plane came apart.

Over the course of the fight, Williams fired all 760 rounds of 20mm cannon shells the F9F carried, according to an account of the engagement from the US Navy Memorial’s website.

But the Soviets scored hits on Williams, too, disabling his rudder and wing control surfaces, leaving only the elevators in the rear of the plane viable for him to move the jet up and down.

Luckily, he said, at this point he was heading in the direction of the US task force off the coast. But one of the remaining Soviet jets was still on his tail.

He said he flew in an up-and-down roller coaster pattern, with bullets flying above and below him as he moved, the Soviet pilot trying to get a clear shot.

Williams’ wingman rejoined the fight at this point, getting on the Soviet’s tail and scaring him off, according to the Navy Memorial account.

But Williams still had some difficult flying to do to get the damaged jet back on board the carrier.

First, with the task force wary of Soviet warplanes possibly attacking it, its heightened air defenses initially thought Williams’ F9F was a MiG, and destroyers guarding the American carriers opened fire on him.

Williams said his commander quickly put a stop to that, eliminating one danger.

Still, Williams had to get his jet on the deck on the carrier, something he’d usually do at an airspeed of 105 knots (120 mph). But he already knew if he went lower than 170 knots (195 mph), his aircraft would stall and plunge into the icy sea.

It worked. He slammed onto the deck and caught the third and final arresting wire.

On the deck on the carrier, Navy crew counted 263 holes in Williams’ plane. It was in such poor shape, it was pushed off the ship into the sea, according to the Navy Memorial account.

But as the plane disappeared below the waves, something else had to also – the fact that the US-Soviet aerial combat happened at all.

News of Williams’ heroics went all the way to the top, with then-President Dwight Eisenhower among the senior US officials eager to speak to the pilot, according to the Navy Memorial’s website.

“Following the battle, Williams was personally interviewed by several high-ranking Navy admirals, the Secretary of Defense, and also the President, after which he was instructed to not talk about his engagement as officials feared the incident might cause a devastating increase of tensions between the US and Soviet Union, and possibly ignite World War Three,” the website says.

A US Defense Department account of the incident also notes that US forces were trying out new communications intercept equipment that day. It was feared that revealing the Soviet role in the combat would have compromised that US’ advantage.

The records of Williams’ dogfight were promptly classified by US officials and he was sworn to secrecy, meaning it would take more than five decades before his victories could be fully recognized.

In 1953, Williams was awarded a Silver Star, but the citation made no reference to Soviet aircraft, just “enemy” ones. And it only mentioned three kills. The fourth was not known until Russian records were released in the 1990s, the website says.

So it was not until 2002, when the records were declassified, that Williams could even tell those closest to him.

“For the rest of his accomplished Navy career, and for decades after retirement, the details of Williams’ dogfight with Soviet MiGs over North Korea remained a secret,” according to the US Defense Department.

“When he was finally contacted by the government and told his mission was declassified, the first person Williams said he told was his wife.”

In the following years, veterans groups who learned what he did said the Silver Star was insufficient reward for Williams, with some saying he should get the military’s highest award – the Medal of Honor.

In December last year, more than 70 years after the Korean War aerial battle, Del Toro said Williams’ Silver Star should be upgraded to the Navy Cross.

California Rep. Darrell Issa, who pushed for Williams to get the upgraded medal, called him “a Top Gun pilot like no other, and an American hero for all time.”

“It is to this day the most unique US-Soviet aerial combat dogfight in the history of the Cold War,” Issa said in a statement.

“The heroism and valor he demonstrated for 35 harrowing minutes 70 years ago in the skies over the North Pacific and the coast of North Korea saved the lives of his fellow pilots, shipmates, and crew. His story is one for the ages, but is now being fully told.”