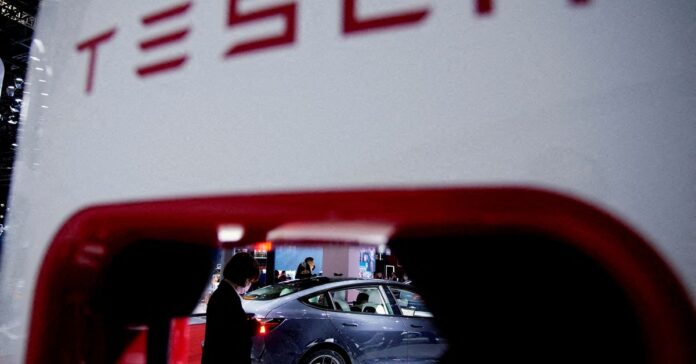 The company is still the world’s most valuable automaker even after losing 65% of its market value in 2022. Shares fell 8.5% to $112 on Tuesday.

“We believe Tesla is facing a significant demand problem … many investors underestimate the magnitude of the demand challenges Tesla is facing,” Bernstein analyst Toni Sacconaghi said.

The shortfall also highlighted the logistics hurdles facing a company known for its end-of-quarter delivery rush, with the gap between production and deliveries widening to 34,000 vehicles as more cars got stuck in transit.

Tesla also plans to run a reduced production schedule in January at its Shanghai plant, extending the lowered output it began in December into 2023, Reuters has reported.

Tesla has tried up prop up demand with a rare set of discounts on its top-selling vehicles as competition deepens from legacy automakers such as Ford Motor Co (F.N) and General Motors Co (GM.N) and startups such as Rivian Automotive Inc (RIVN.O) and Lucid Group Inc (LCID.O).

“Tesla’s previous gains have been based on delivering super-charged growth. Without that it looks (like) a different proposition,” said Russ Mould, investment director at AJ Bell.

Sacconaghi said demand challenges will persist in 2023 as most Tesla models do not qualify for a tax rebate and the company would need to either reduce its growth targets or cut prices.

The company, which has some of the highest margins in the industry, will report quarterly results on Jan. 25.

Tesla said in a separate statement on Monday it plans to host its Investor Day on March 1 and will likely discuss long-term plans for expansion and capital allocation at the event that will be held at its Texas Gigafactory.

The automaker also hinted at a “generation 3” platform that could be shown to investors at the event. Musk said in October that Tesla was working on a “next-generation vehicle” which will be cheaper and smaller than the Model 3 and Model Y cars.