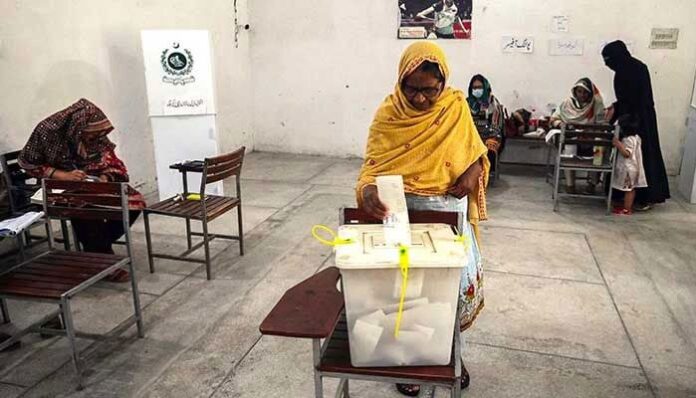 KARACHI: The Sindh government wrote on Saturday a letter to the Election Commission of Pakistan (ECP) again seeking the postponement of local government (LG) polls in Karachi and Hyderabad, citing a lack of security after the armed forces excused themselves from providing security to sensitive polling stations.

According to the letter, the government has urged the ECP to postpone the polls until fool-proof security is ensured. Lack of security could result in any untoward incident, the Sindh government argued.

Army excuses itself from providing security

The letter came hours after the armed forces declined to provide security at “sensitive and most sensitive” polling stations during the LG polls in Hyderabad and Karachi divisions on January 15.

A letter from the interior ministry read, “the GHQ has stated that as already intimated given current deployment and very high number of sensitive and highly sensitive polling stations, required static deployment and security cover to polling staff and material as desired by (ECP) is not possible.”

The General Headquarters (GHQ) has repeatedly declined the deployment of troops for the local body polls amid the security situation in the country.

The GHQ said that the provincial government is responsible for providing first-tier security/static deployment outside polling stations.

The development came hours after the ECP, rejecting the Sindh government’s request, decided to hold local government polls in Karachi and Hyderabad as per the schedule.

A meeting of the institutions responsible for national security was held in Karachi, the sources said, adding that the huddle expressed “severe concerns” over the upcoming LG polls in Sindh.

The officials of the national security institutions conveyed the meeting’s concerns to the commission on security threats. The huddle also discussed the 17 security threats received during the past one-and-half months in the province, the sources added.

But before the intelligence agencies’ warning, Sindh Information Minister Sharjeel Inam Memon said that the provincial government had decided to delay the polls due to concerns of the Muttahida Qaumi Movement-Pakistan (MQM-P).

On Friday, MQM-P reiterated that the polls could not be held until new delimitations, but at the same time, it did not rule out its participation.

“If despite our concerns, the elections do take place, then we will not boycott them. However, we will not accept the results of the elections,” MQM-P spokesperson Ahsan Ghauri told Geo.tv.

However, well-placed sources shared that Prime Minister Shehbaz Sharif, in a telephonic conversation with MQM-P chief Khalid Maqbool Siddiqui, assured to address their grievances after the party threatened to quit the alliance if its concerns were not addressed.

Meanwhile, the sources privy to the matter said that Pakistan Peoples Party (PPP) Co-chairman Asif Ali Zardari also made a telephone call to Siddiqui and extended a dialogue offer assuring the party to resolve its issues.