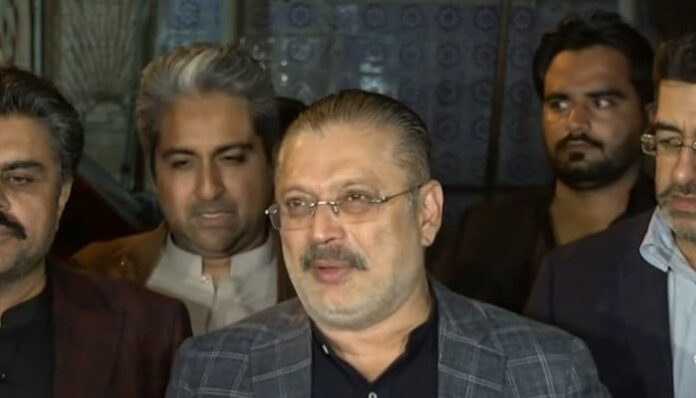 Sindh Minister for Information Sharjeel Memon said early Friday that the provincial government has decided to delay the local government elections in Karachi, Hyderabad, and Dadu, with opposition parties strongly condemning the decision.

In a press conference, the information minister said that the decision was taken after the Sindh government withdrew the notification regarding the delimitations of the constituencies in Karachi as the Muttahida Qaumi Movement-Pakistan (MQM-P) has reservations over it.

“They (MQM-P) are our allies in the federal government and we take the concerns of our allies very seriously,” the minister said, ruling out that the decision was taken under duress.

The development comes after the provincial cabinet, with Sindh Chief Minister Syed Murad Ali Shah in the chair, held a late-night meeting after the MQM-P threatened that it would not allow the local body polls to take place.

The second round of LG elections was scheduled to take place on July 24 last year, but the Sindh government excused itself from holding the polls over the lack of security and police presence due to the flooding. Later, the elections were also postponed on August 28, October 23, and later today the announcement was made for January 15 — making it the fourth time.

As the “rebranded” MQM-P factions united earlier today, the party’s convener, Khalid Maqbool Siddiqui, had also warned that if their reservations regarding the local body polls were not addressed, then they would “fight for our rights”.

In the presser, later on, the information minister noted that despite the polls being delayed in the three districts, the elections will go on as scheduled in Tando Allahyar, Badin, Sujawal, Thatta, Tando Muhammad Khan, Matiari, Jamshoro.

Defending the decision to not hold the polls, there was a lack of police personnel to be deployed at the polling stations, while the army, through the General Headquarters (GHQ), had also excused itself — given the situation on the border and militancy.

For the representatives that have already been elected in the first phase and will be elected in the second phase, the information minister said the Sindh cabinet would meet once again tomorrow at 11am to decide when the oath-taking ceremony will take place for them.

In response to a question that a similar situation took place during the recently postponed Islamabad local body polls, Memon said: “The election commission has its rules of business and so do the honourable courts and we will also have to see what they decide.”

The information minister, defending the decision to delay the polls two days before it was due, said the government could not decide since the matters were sub judice and the institutions were hearing cases regarding it.

“Also, MQM-P has been our ally and they are our allies still in the federal government, so definitely, when they have their grievances, we will try to facilitate them on our level,” Memon said.

In response, the Pakistan Tehreek-e-Insaf (PTI) has decided to stand up to the provincial government’s decision to postpone the elections and said the party will challenge the delay in the courts.

In a statement, Leader of the Opposition in Sindh Assembly Haleem Adil Sheikh said that the MQM-P had worked as a pressure group to the Pakistan Peoples Party’s (PPP) “subservient team”. Both parties — MQM and PPP — are two sides of the same coin, he said.

Sheikh disparaged PPP leader Asif Ali Zardari without naming him and said: “Sindh’s biggest ailment and money-worshipper fled Karachi after he had to lick the dust in Punjab.” He called on Zardari to quit politics by admitting moral as well as political defeat.

The PTI leader claimed that the people of Karachi have identified the “mercenaries and the killers” of the Muhajirs and Sindhis. Sheikh said that the provincial government has made the decision to delay the polls as the Pakistan Democratic Movement (PDM) was quite frightened of the imminent defeat in Karachi and Hyderabad.

A single person — PTI Chairman Imran Khan — has exposed the whole system in front of the masses, he claimed. The PTI leader said that those who speak about democracy are scared of people’s democratic rights.

He added that the idea of going into public had disturbed the two parties — MQM-P and PPP. Sheikh said that the plan to occupy the city through the Chief Minister’s House, Bilawal House, and Governor’s House had “flopped”.

JI Karachi’s spokesperson Zahid Askari, speaking to Geo.tv over the phone, said the party would protest against the “anti-Karachi decision” as there were been no moral and legal reasons to postpone the polls.

The party will explore every constitutional, legal, and democratic avenue to counter the Sindh government’s decision, the spokesperson noted.

Moreover, the Sindh High Court (SHC) dismissed the MQM-P’s petition, he said. The JI spokesperson asserted that Karachi could not be put back on track without holding the local body elections.

He said that the provincial government’s decision is meant to benefit the MQM-P, especially following their reunion. However, the citizens of Karachi have recognised the faces of these people, Askari said.

The MQM-P could not deliver despite having a run with municipal institutions for 35 years and they would not be able to deliver in the future, he said.

The PPP is making efforts to help the MQM-P get elected, he alleged. The JI spokesperson alleged that the two parties had been in collusion but they had been issuing statements against each other.

The court and the Election Commission of Pakistan (ECP) have ruled in favour of holding LG elections. “Hence, the provincial government’s decision to postpone the polls stands in opposition to democracy and law and in contempt of the verdict of the court and the ECP,” he said.