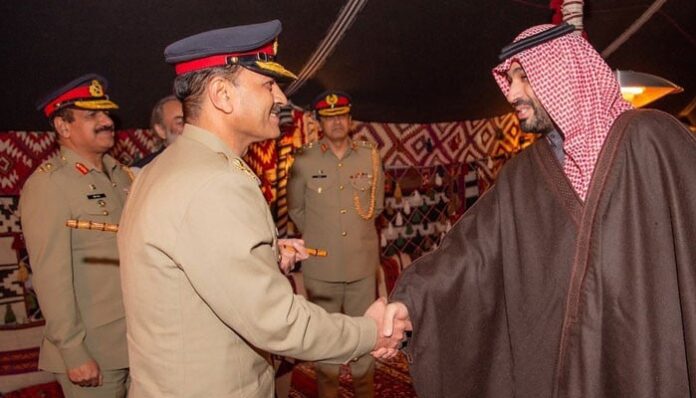 RIYADH: Islamabad’s efforts to shore up the country’s forex reserves with the help of Saudi Arabia — amid a worsening currency crisis — have started paying off as Riyadh is beefing up its deposit in the State Bank of Pakistan (SBP) from $3 billion to $5 billion.

According to the Saudi media, Crown Prince Mohammad Bin Salman Tuesday directed his financial officials to study increasing the Pakistan deposit by $2 billion.

The development comes a day after the Saudi crown prince’s meeting with Chief of Army Staff General Asim Munir, who is on his first overseas official visit to the kingdom.

Last month, the Saudi Fund for Development (SFD) extended its term for the $3 billion deposit in the State Bank of Pakistan, which was set to mature on December 5.

The SBP had signed an agreement with the SFD in November 2022 to receive $3 bn, to be placed in the central bank’s account with an aim to improve its foreign exchange reserves.

According to a Saudi Press Agency (SPA) report on Tuesday, Crown Prince Mohammad Bin Salman has directed the SDF to study increasing the amount of the deposit, which has previously been extended on December 2, 2022 to $5 billion, confirming the kingdom’s position supportive to Pakistan’s economy and its people.

“This came within the framework of the existing communication between HRH the Crown Prince and Muhammad Shehbaz Sharif, Prime Minister of Pakistan,” the SPA added.

The state news agency added that the Saudi leader has also directed to study augmenting Riyadh’s investments in Pakistan, which have previously been announced on August 25, 2022, to reach $10 billion.

Pakistan is facing a currency crisis due to dwindling forex reserves which have slumped to $4.5 billion — enough for three weeks of imports.

On the other hand, Islamabad is making hectic efforts to revive the International Monetary Fund’s (IMF) loan programme stalled for months.

A Pakistani delegation held a meeting with the IMF officials in Geneva on Monday on the sidelines of the donors conference and reiterated its commitment to completing the programme.

Finance Minister Muhammad Ishaq Dar and IMF officials “discussed challenges to regional economies in the wake of climate change,” according to a Finance Ministry statement following the meeting’s conclusion.

“(The) finance minister reiterated the commitment to complete the Fund programme,” it added.

The lender is yet to approve the release of $1.1 billion originally due to be disbursed in November last year, leaving Pakistan with only enough foreign exchange reserves to cover one month’s imports.

Meanwhile, Prime Minister Shehbaz Sharif on Tuesday expressed gratitude to the countries and aid agencies for making the conference on Pakistan’s post-flood challenges a success. “A big thank you to Heads of states and governments, European Union, our development partners and United Nations for making Resilient Pakistan Conference a resounding success,” he said in a tweet.

He mentioned the active role of United Nations Secretary-General Antonio Guterres in highlighting the plight of Pakistan’s flood-hit population.

“The UN Secretary General has shown stellar leadership all along. People of Pakistan will forever remain grateful,” he said.

Shehbaz Sharif said the world witnessed yesterday how the nations could come together in a show of solidarity to create a model of win-win partnership to lift the suffering humanity out of tragedy. “I was deeply moved by the compassion on display at Geneva Conference. Together, we will rebuild lives and hopes,” he said.

Pakistan on Monday secured over $10 billion pledges from the international financial institutions, donor agencies and development partners for the rehabilitation, recovery and reconstruction of flood-affected areas, during an International Conference on Climate Resilience.

Prime Minister Muhammad Shehbaz Sharif led the Pakistan delegation at Geneva moot where he described in detail Pakistan’s Resilient Recovery, Rehabilitation and Reconstruction Framework (4RF), which laid out a multi-sectoral strategy for rehabilitation and reconstruction in a climate-resilient and inclusive manner.