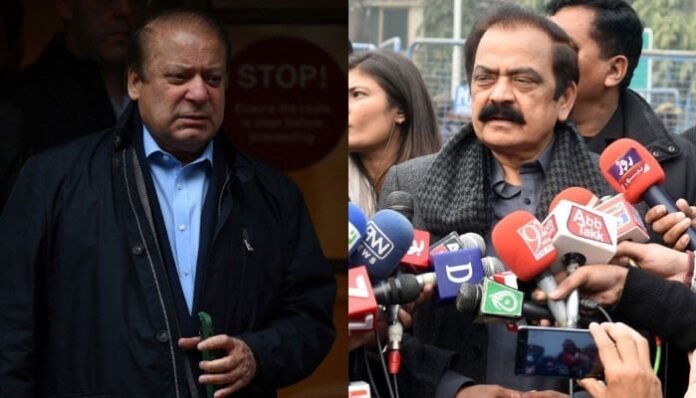 Pakistan Muslim League-Nawaz (PML-N) supremo Nawaz Sharif will return to Pakistan with “honour” after successfully dealing with the legal challenges, claimed Interior Minister Rana Sanaullah ahead of the upcoming elections in Punjab and Khyber Pakhtunkhwa (KP).

During an interaction with journalists in London, Sanaullah said that the PML-N supremo will land in the country soon and will chair the party’s parliamentary board to finalise candidates for the elections.

“Few senior party leaders, including I, should resign to run election campaign along with Nawaz Sharif,” he suggested, as the general polls in Pakistan’s biggest provinces are expected to take place within 90 days.

The assembly was dissolved last week in line with Pakistan Tehreek-e-Insaf (PTI) Chairman Imran Khan’s wishes — and the Khyber Pakhtunkhwa has also been disbanded.

The PTI has called on the federal government to dissolve all the assemblies, including the National Assembly, and hold general elections across the country.

The party chairman, who was ousted as the prime minister in April last year, has repeatedly stated that the solution to the country’s political and economic problems was only through fresh polls.

Responding to a question, the minister said that the PML-N leadership would decide whether he will stay in the federal government or Punjab.

“Nawaz Sharif should land in Lahore,” he suggested and vowed that he would be accorded an unprecedented welcome upon his return from London — where he is residing since 2019.

His return would change the country’s political scenario, Sanaullah said. The interior minister added that the PML-N supremo will hold public meetings across Punjab once he lands in the country.

Responding to a question about the judiciary, the minister said that they have reservations about some judges, but they respect the judiciary and believe that it would provide justice to everyone.

It is the prerogative of the concerned institutions to decide on the arrest of PTI Chairman Khan and not of the government, said the interior minister.

‘I told Gen (retd) Bajwa you wronged me’

Moving on, the interior minister told the journalists that former army chief General (retired) Qamar Javed Bajwa and ex-intelligence chief Lt Gen (retd) Faiz Hamid will admit today that what they did during their respective terms in office was “wrong”.

“Nawaz Sharif’s stance has been clear: we were wronged. Now, the ones who wronged us have also admitted their mistake,” the minister said, hitting out at the previous army chief.

In his conversation with journalists a day earlier, the PML-N elder had blamed Gen (retd) Bajwa and Lt Gen (retd) Hamid for the current mess in the country.

The former prime minister held the ex-military men for spinning Pakistan around for their personal wishes and whims in the form of installing the Pakistan Tehreek-e-Insaf (PTI) government in 2018.

Meanwhile, Sanaullah also slammed the former military leadership and said that how was it possible that an institution had lodged a case against him without permission from the then-army chief.

“I told Gen (retd) Bajwa you wronged me. I also told the institutions that investigate the case and if you find evidence, then arrest me,” the interior minister said.