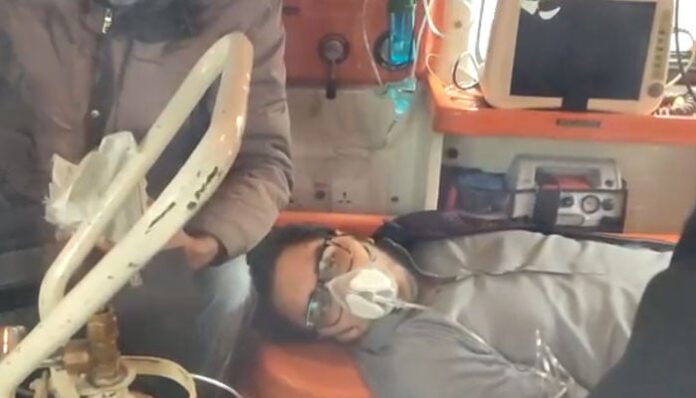 ISLAMABAD: A district and sessions court of Islamabad on Friday postponed the indictment of PTI leader Shahbaz Gill in a sedition case registered against him  inciting mutiny within the army after he arrived in court in an ambulance.

Gill’s lawyer argued that they could not take him out of the ambulance as he had an oxygen mask on. The court remarked that it looked like the suspects were trying to buy time.

The court marked Gill’s attendance while he remained in the ambulance.

On the other hand, Ammad Yusuf, another suspect in the case, applied for an exemption from attendance through his lawyer. He said that his client contracted malaria and should be excused from the hearing.

The judge remarked that Shahbaz Gill came from Lahore in an ambulance, but Ammad Yusuf was not able to come from Karachi. At this, the lawyer submitted his medical report to the court.

However, the court rejected the application and issued a bailable arrest warrant against Yusuf, and adjourned the indictment proceedings against Gill and Ammad till January 20.

The court also issued instructions to ensure the suspect’s attendance at the next hearing.

In the last hearing, on December 22, the court issued a bailable arrest warrant for Shahbaz Gill in the sedition case, saying the PTI leader should ensure his appearance at the next hearing and can obtain bail against surety bonds of Rs200,000. The case was adjourned till January 6.

The warrants were issued after Gill’s repeated failure to appear in court.

Gill was taken into custody on August 9 for inciting mutiny within the Pakistan Army through his remarks during a private TV show.

He was booked in a sedition and arms recovery case in August and stayed in detention for over a month. He, however, secured bail from the Islamabad High Court (IHC) in the sedition case on September 15 after repeatedly attempting to get released.

The case against Gill is registered at Kohsar Police Station under Sections 124-A (sedition), 505 (statements conducing to public mischief), and the Pakistan Penal Code.

The PTI had insisted on demanding the party leader’s bail, alleging that he was facing humiliation, torture and sexual abuse in police custody.

While Gill was in police custody, the PTI had repeatedly alleged that he was “sexually assaulted”, “tortured”, and “stripped-naked”. However, the authorities completely denied the claims.