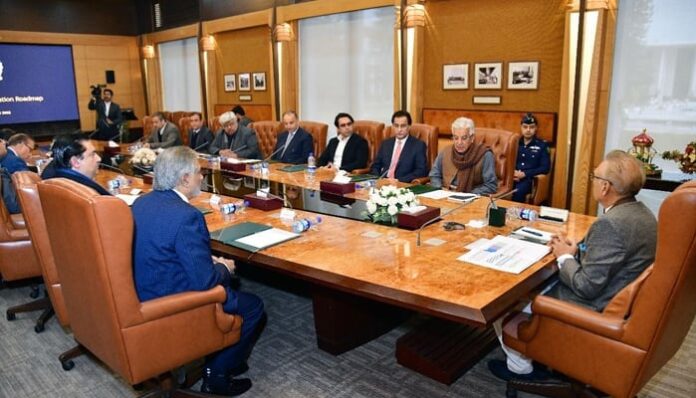 The president’s call comes as the country is facing a severe energy crisis, with the government mulling to shut down business earlier than usual hours, but the plans have been halted for now as the traders strongly rejected them.

President Alvi, during a meeting on energy conservation at Aiwan-e-Sadr, underscored that a comprehensive policy should be prepared after consulting all stakeholders, including the provinces, besides launching an awareness campaign across the country to conserve electricity, gas, and water.

The president said there is a need to generate out-of-the-box ideas, absorb creative ideas, benchmark best practices around the world, develop policies and strategies around them, and ensure their implementation on a timeline basis to achieve the desired objectives in the shortest possible timeframe.

“Pakistan can make rapid and accelerated progress in all sectors provided it enhanced and accelerated the implementation speed on initiatives of national importance, following a strict timeline while maintaining quality and ensuring desired outputs and outcomes,” he observed.

President Alvi said that the Islamic teachings stressed the conservation of resources even if there was an abundance of them.

He said the teachings of the Quran and Hadith stressed the conservation of water even if one was performing ablution on the riverside.

“Islam discourages the wastage of resources and emphasises their efficient and productive use and their sharing and donation to the unprivileged sections of society,” he added.

He called for adopting the cherished Islamic values to change our attitudes and behaviours while using precious resources which included water, gas and electricity.

The president said that a consensus should also be built among all the stakeholders, including traders, businesspersons, and representatives of the chambers of commerce and industries for determining the timing and procedure of closing the marketplaces, and businesses, especially in the evenings for energy conservation.

He said that a well-thought-out, comprehensive, and fully sold-out strategy should be launched and implemented on a timeline basis for the replacement of all inefficient fans and incandescent lamps and bulbs by encouraging the use of efficient fans and bulbs.

The president appreciated the idea to manage the cool load during summers, which could be reduced substantially from approximately 12,700 MW by eliminating the use of inefficient fans of 120 W and replacing them with efficient fans of 60-80 W.

He said that a comprehensive building plan for all houses, public places and buildings should be prepared, which should compulsorily include the design and selection of construction materials to make all buildings energy efficient, and cost-effective.

He proposed that a model of energy-efficient building codes with in-built mechanisms to harvest and harness rainwater, solarise rooftops, and roof-top gardening may first be prepared, tested, and then replicated by all the provinces after achieving consensus to save precious energy resources.

The president also appreciated the idea to incentivise the usage of e-bikes in place of fuel-driven bikes by encouraging and incentivising the conversion of the existing bikes into e-bikes and increasing the manufacturing capacity of e-bikes within the country which, he said, would not only benefit the bike owner but would also substantially reduce the fuel import bill.

He said that a consensus should be built across Pakistan among all the stakeholders for water pricing. He said that a large percentage of the water was wasted due to inefficient use of flood irrigation which also drained down the nutrients from the soil which reduced the productivity of the crops.

He said that a fully sold-out water pricing policy would help in the efficient use of water and saving thus made could be diverted for productive use.

President Alvi emphasised the need for carrying out the electricity, gas and water audits of all public sector buildings across the country to identify energy and water-inefficient appliances, switches and habits, and later put in place a mechanism to replace all such appliances with efficient ones to preserve and conserve energy and water.

He underlined the importance of developing a comprehensive awareness campaign on the conservation of electricity, gas, and water, in consensus with all the stakeholders through conventional and social media products such as morning shows, programmes, dramas, sit-ins, talk shows etc, as well as mobile caller tones through PTA by all the cellular companies.

This, he said, would create mass awareness and education among the general masses to preserve and conserve energy. The President also highlighted the importance of ulemas and mosques in the awareness campaign saying that Wafaq ul Madaris should also be engaged in creating awareness through mosques and sermons.

The president said that Pakistan suffered from climate change-induced super floods, which caused devastation across the country but also brought precious water to Pakistan.

He said that most of this precious resource was wasted due to the absence of delay-action dams and reservoirs. He urged the need to devise a consensus-based mechanism to harness the flood and rainwater and ensure its effective and productive use across the country.

The president quoted an example of the Green Presidency Initiative, which comprised of two parallel activities — Energy Conservation and Shifting towards Green Energy — which he said has reduced its energy consumption load by 42.5%, whereas the entire energy needs of the Presidency are met by its in-house 1MW Solar Power Plant installed through Corporation Social Responsibility Scheme without incurring any cost to the national exchequer.

This, he said, has saved Rs. 152.3 million since its installation.

In addition, the President’s House on the energy audit recommendations has replaced all inefficient appliances through the CSR programme and observed strict energy conservation practices. This model, he proposed, should be replicated in other public sector buildings wherever possible.

President Alvi said that Pakistan had an abundance of land and water, but unfortunately, due to a lack of efficient agriculture and water usage mechanisms, the yield was far less compared to developed countries.

He said that by using hydroponics and vertical farming techniques and adopting technology to grow vegetable fruits and crops in a controlled environment, Pakistan can become self-sufficient in food production and may also be able to export them to other markets.

He said that Pakistan should benchmark and learn from the conservation of energy and water usage practices of the Netherlands, which was 19 times smaller than Pakistan but was the second biggest food exporter in the world.

President Alvi stated that in France the building codes included the use of rooftops for plantation and solar systems, which was helping them save energy, adding that the solarisation of motorways in France was also creating a large amount of green energy which can also be emulated.