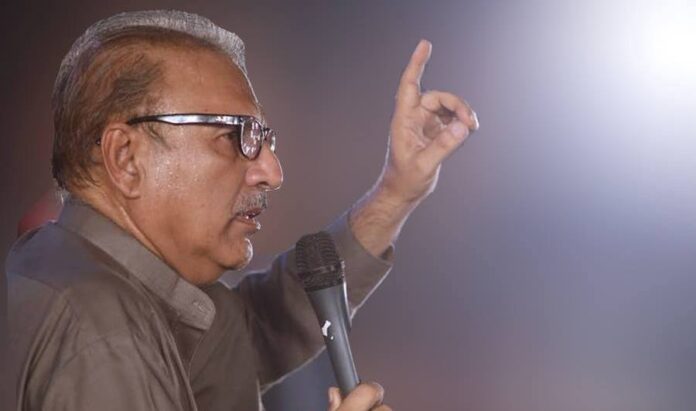 In order to lower the rising political temperature in the country, President Arif Alvi has stepped forward and plans to conciliate between the Prime Minister Shehbaz Sharif and Pakistan Tehreek-e-Insaf. While giving an interview to BBC urdu, he blamed social media for the increasing differences and Issues between Imran Khan & Gen Qamar Javed Bajwa.

“If social media is given more importance over such issues, then it leads to problems,”

Arif Alvi said that it is very important to cool down the political tensions going in the country and advised political leaderships to hold talks.

“It is my offer to them [political parties] to sit together and then senior leadership can hold talks,”

Arif Alvi had held multiple rounds of talks with federal minister and he opinionated that  Pakistan Democratic Movement (PDM) government used delaying techniques with regard to PTI,. He also revealed that there’s no communication between the two parties in the past one month”.

He also told that government has decided to hold talks with PTI government but not results were coming out of it. He revealed that economy is also greatly affected due to this and said that due to the dialogues, there was chance of improvement.

While proposing both parties to hold talks together, Arif Alvi said:

“I am telling everyone not to go in that direction, rather come together and work. “It would have been better if they listened to me. I am not a philosopher but, if you look at surveys of that time, it shows that there should have been a dialogue.”

Issues between Imran Khan & Gen Qamar Javed Bajwa- Are they due to Social media?

He said that it was an election year and emphasized that dialogues should be held before polls. He further added that matters related to the elections should be sorted out in time so that more emphasis is showered on the economy and welfare projects.

When he was asked about the deteriorating situation between prime minister Khan and ex-army chief General (retd) Qamar Javed Bajwa, President Alvi said that he doesn’t know anything about it.

“I have tried to end such misunderstandings.“Being the president, it is my responsibility to keep the Federation together. Cooperation is better than discord for Pakistan and such is also my advice.”

Do you think social media is responsible for the difference between these parties and ex-Chief of Army Staff? Let is know in the comments section below.