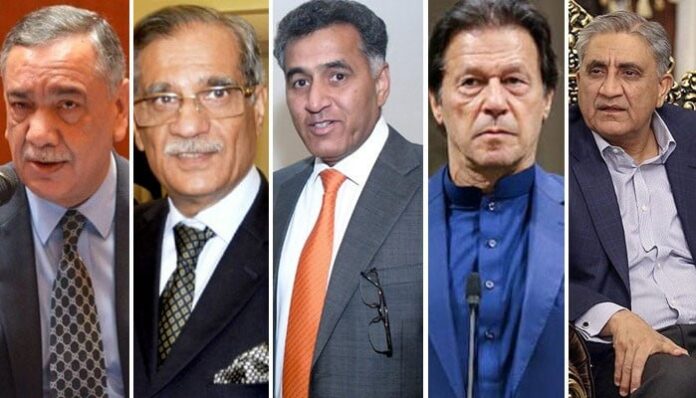 LONDON: The Pakistan Muslim League (Nawaz) is inching closer to adopting an aggressive narrative against five individuals for the economic and political chaos in the country and for bringing Pakistan to the current stage through a long-planned conspiracy.

The five individuals against whom the PMLN has started turning its guns with full ferocity are General (retd) Bajwa and Lt General Faiz Hameed, retired judge Saqib Nisar and Asif Saeed Khosa and Imran Khan, the former prime minister.

Sources have confirmed that several senior figures of the party have recommended to PMLN supremo Nawaz Sharif that the PMLN’s focus should be on Bajwa, Faiz, Imran Khan, Saqib Nisar and Asif Saeed Khosa for being solely responsible for conspiring to dislodge the PMLN leader and his government in 2017 and rigging the mandate of PMLN in 2018 to install the Pakistan Tehreek-e-Insaf (PTI) government.

Sources have confirmed that almost everyone in the PMLN agrees that attacks on these five individuals should be the new narrative of the party to explain to the people of Pakistan that Pakistan’s progress was halted in 2017 when Saqib Nisar-led judiciary went out of its way to expel Nawaz Sharif from electoral politics by disqualifying him for life in the Iqama case; appointing a Supreme Court monitoring judge against Nawaz Sharif and pressuring the judges to give verdicts against Nawaz Sharif, his family and colleagues. The PMLN, said the sources, will focus on General Bajwa and Lt General Faiz for implementing a plan to bring Imran Khan to power at all costs and this has brought Pakistan to the current stage after nearly four years of PTI’s government.

Since his ouster from power through a vote of no confidence in April 2022, former premier Imran Khan has attacked General Bajwa – without naming him when General Bajwa was in uni form and openly naming him after his retirement – and

fellow generals, calling them traitors, American agents and evil for not stopping the no-confidence motion against him. He has not said a word against General Faiz Hameed, whom he wanted to continue as the powerful ISI chief, but it was Nawaz Sharif who unleashed a storm in October 2020 when he named both General Bajwa and General Faiz Hameed in a live address from London, accusing them of ousting him from power to install Imran Khan’s government through rigging in polls.

That narrative – of naming and shaming Bajwa and Faiz – was harshly criticised in media circles but it won support for Nawaz Sharif on the ground. However, the PMLN went quiet after coming to power in the Centre as Shehbaz Sharif became the prime minister. Now PMLN leaders are of the view that directly blaming the military establishment has won support for Imran Khan as he had shifted all blames and wrongdoings towards his former backers while claiming innocence on his part for as long as he was in the government.

A senior leader confirmed that the new narrative was a work in progress and although the PMLN has wasted time in adopting this but now there is a feeling that this will be the permanent narrative of the party.

The senior leader confirmed: “Almost everyone is of the view that the rebranded narrative cannot succeed unless it takes the fight directly to the main characters of the political events of the last six years, who played a key role in bringing about the Tabdeeli project in the shape of Imran Khan. This is a project which could never have succeeded without full support from Saqib Nisar, General Bajwa, General Faiz Hameed, Asif Khosa and Saqib Nisar. Everyone in Pakistan is aware of the role these characters played violating rules, Constitution, law and oath.”

Stung by the recent setbacks in Punjab, PMLN stalwarts have advised Nawaz Sharif that the only way forward is a constructive, aggressive approach which should minus no words in explaining to the masses what actually happened to Pakistan.

On their part, Saqib Nisar and Asif Saeed Khosa have denied delivering political executions through their decisions. Imran Khan maintains that he came to power after a struggle of nearly 24 years but he has accepted that General Bajwa and General Faiz Hameed were like pillars of strength for his party, including managing media, politics, lawmakers and votes in the upper and lower houses of parliament.

General Bajwa, through media confidantes, has said he offered every kind of support to the PTI government and Imran Khan’s own ally Pervaiz Elahi has also publicly said General Bajwa and fellow generals changed nappies of Imran Khan for nearly four years.

On its part, the PMLN is under criticism from its own supporters for adopting a laid back and passive approach since the ouster of Imran Khan from power. The PMLN leadership is under attack from its supporters for not coming up with an aggressive position in response to its main rival PTI’s juggernaut, blaming the Pakistan military, the US and a “foreign conspiracy” to oust its government.