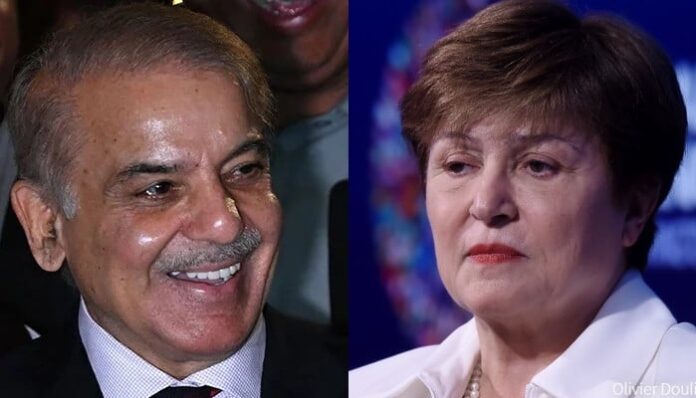 Earlier this week, the IMF chief turned down PM Shehbaz’s invitation to attend the conference but expressed willingness to attend the huddle virtually.

The IMF spokesperson said Georgieva explained during the call that “she will only be able to join the conference virtually” due to the IMF board meetings scheduled for January 9-10. She also reiterated support for Pakistan’s efforts to build a more resilient recovery while expressing sympathy to those directly affected by the floods.

“The IMF delegation is expected to meet with Finance Minister Ishaq Dar on the sidelines of the Geneva conference to discuss outstanding issues and the path forward,” a statement of the IMF spokesperson said.

PM Shehbaz will lead a high-level delegation to Switzerland where he will co-host the conference along with United Nations Secretary-General Antonio Guterres, starting on January 9. The conference will help mobilise international support to help Pakistan’s people and government recover more effectively from the devastation caused by recent floods.

Pakistan will present the Resilient Recovery, Rehabilitation and Reconstruction Framework (4RF) at the conference, and seek international support and long-term partnerships for its implementation.

The 4RF document outlines a prioritised and sequential plan, defined at the federal and provincial levels, and includes the financial mechanism and institutional arrangements for its execution in an open, transparent and collaborative manner.

At the conference, the premier will outline Pakistan’s vision for rehabilitating the affected population and reconstructing the damaged infrastructure in a resilient manner with the support of development partners, and the country’s transition towards a more dynamic and sustainable economic development model.

Federal ministers from Pakistan will elaborate on the 4RF document and also present Pakistan’s long-term plan for building climate resilience and adaptation. The perspectives of the four provinces will be articulated by their representatives.

Heads of state and government, ministers and high-level representatives from several countries and International Financial Institutions, foundations and funds, as well as from international development organisations, private sector, civil society and INGOs will participate in the conference.

The conference will help Pakistan in forging a long-term partnership with its friends and development partners on the basis of 4RF document and serve as a demonstration of international solidarity with the people of Pakistan as they commence the journey towards rebuilding their lives and livelihoods.