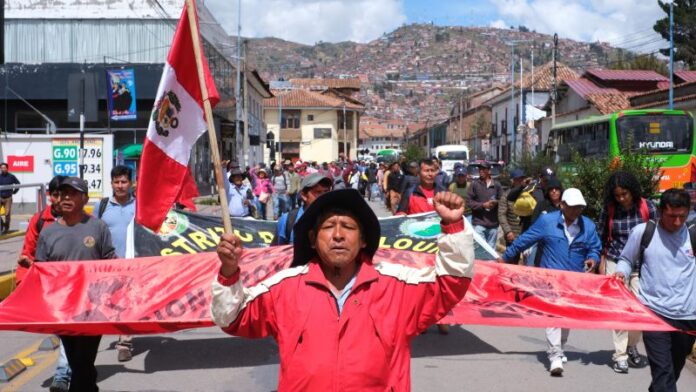 Almost 12,000 police officers are preparing to guard the Peruvian capital Lima as the country braces for massive protests on Thursday.

A heavy police and military presence could be observed in the heart of city early Thursday, with key locations such as the parliament, the prosecutor’s office and the army headquarters receiving extra protection.

Peru is seeing some of its worst violence in decades, which erupted last month following the ousting of former President Pedro Castillo, as protesters who oppose the current government call for political change.

Thousands of protesters are traveling to Lima from across Peru. They are expected to try to march towards downtown Lima on Thursday demanding the resignation of President Dina Boluarte and calling for general elections as soon as possible.

A total of 11,800 police officers will be present in the city, General Victor Sanabria, head of Peru’s National Police for the Lima region, told local media.

The Palace of Justice, which is the seat of the Supreme Court and a symbol of judicial power, also has extra protection, as do selected TV stations.

Protesters, particularly students, have been seen arriving on buses from different parts of the country since Wednesday.

Thursday’s protests are the latest stage in a rolling crisis sparked by Castillo’s ouster.

To date 52 people have died due to the ongoing social unrest in the country, with a further 772 injured, the Ombudsman’s office said Thursday.

In December, a state of emergency was imposed, airports and highways became the site of some clashes, and hundreds of foreign tourists were stranded in the country amid the chaos. As of Wednesday, 105 roads were blocked across 45 provinces, said officials.

Boluarte’s position is now looking as embattled as her predecessor. Peru’s top prosecutor’s office has launched an inquiry into her handling of the unrest, and several of her ministers have resigned.

Protesters have been demanding new elections, the resignation of Boluarte, a change to the constitution and the release of Castillo, who is currently in pre-trial detention.

Castillo, a former teacher and union leader who had never held elected office before becoming president, is from rural Peru and positioned himself as a man of the people. Many of his supporters hail from poorer regions, and hoped Castillo would bring better prospects for the country’s rural and indigenous people.

While protests have occurred throughout the nation, the worst violence has been in the rural and indigenous south, which has long been at odds with the country’s coastal White and mestizo, which is a person of mixed descent, elites.

Peru’s legislative body is also viewed with skepticism by the public. The president and members of congress are not allowed to have consecutive terms, according to Peruvian law, and critics have noted their lack of political experience.