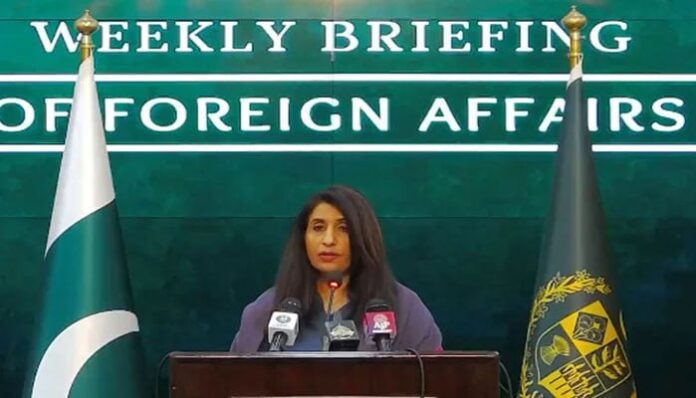 Following the latest terror attack from the Iran border, Pakistan on Thursday urged the Iranian authorities to investigate the cross-border terrorist attack in the Panjgur district of Balochistan, demanding the authorities bring the perpetrators to task.

A day earlier,  as many as four security personnel were martyred when terrorists attacked from “Iranian soil” as they targeted a convoy of security forces patrolling along the Pakistan-Iran border.

Foreign Office (FO) Spokesperson Mumtaz Zahra Baloch, at her weekly news briefing in Islamabad, said Pakistan commits that its territory will not be used for undertaking cross-border attacks in Iran, and “we expect the same from Iran”.

Baloch revealed that communication channels are active, and Pakistan has shared its concerns regarding the attack with the Iranian authorities.

In response to a question, the FO spokesperson said Pakistan wants pleasant relationships with all its neighbours, including India, and seeks to settle all issues, including Kashmir, through dialogue.

However, India’s unabated hostility and retrogressive moves have vitiated the environment and hindered the process of peace and collaboration, she added.

She said the onus remains on India to create enabling circumstances for meaningful talks adding that the reversal of India’s illegal and unilateral actions of August 5, 2019, in the Indian Illegally Occupied Jammu and Kashmir is key to the initiation of dialogue.

The spokesperson said Pakistan would appreciate it if the international community persuades India to take such measures.

The FO spokesperson also said that Foreign Minister Bilawal Bhutto-Zardari will visit Tashkent, Uzbekistan, on January 25 to attend the 26th meeting of the Council of Ministers of the Economic Cooperation Organisation.

She said the foreign minister will address the moot and hold bilateral meetings with participating ministers and other dignitaries on the sidelines of the event.