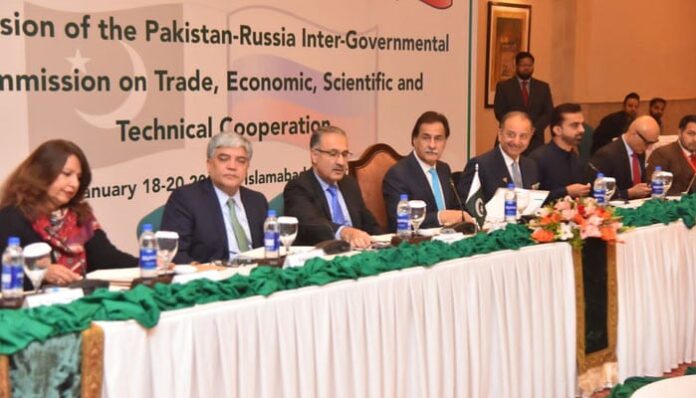 ISLAMABAD: Following the conclusion of Annual Inter-governmental Commission talks between Pakistan and Russia here on Friday, the two sides agreed that Moscow will start exporting crude oil to Islamabad after March.

Confirming the news, Minister of State for Petroleum Musadik Malik revealed that Pakistan wanted to import 35 per cent of its total crude oil requirement from Russia. He said that currently, Russia did not have liquefied natural gas (LNG) for Pakistan.

Meanwhile, Russia’s Energy Minister Nikolay Shulginov, who is visiting the country, said Pakistan would pay for energy purchases from Russia in currencies of friendly countries.

During talks, Islamabad and Moscow agreed that after consensus on technical specifications was achieved, the oil and gas trade transaction would be structured in a way it had mutual economic benefit for both the countries.

The officials also agreed to strengthen energy cooperation, enhance energy trade and broadening energy infrastructure investment based on strategic and favourable commercial terms. Both sides agreed to work on a comprehensive plan for energy cooperation that would form the foundation for future work and is to be finalised in 2023.

The Russian side was invited to potential projects of the federal and provincial governments of Pakistan, including in public-private partnership mode, and requested to explore possibilities.

“Both sides have resolved the pending issues related to the exchange of information on certificates of origin of goods with the use of an electronic verification system and shall endeavour to finalise the above-mentioned protocols by the end of May 2023,” a joint statement issued on Friday read.

The officials agreed to nominate focal persons from both sides to enhance mutual cooperation and discuss issues concerning connectivity and logistics in Central and South Asia. During meetings held in the last three days, it was decided that innovative ways of doing business, including barter trade, would be adopted and they agreed to explore further options.

“In the context of the desire of both parties to promote regional integration and Eurasian connectivity, the two sides also agreed to share information on developing and improving rail and road infrastructure,” the statement read. The following documents were signed during the meeting: an agreement regarding cooperation and mutual assistance in customs matters; protocol on the exchange of documents and data on customs value of goods transported and a working agreement on the airworthiness of aeronautical products.

The eighth session proceeded from discussions and decisions of the seventh IGC meeting and carried the process forward besides exploring additional avenues of cooperation. Pakistan and Russia agreed to further strengthen collaboration in the fields of trade and investment, energy, communications and transport, higher education, industry, railways, finance and banking sector, customs, agriculture, science and technology, and information technology.

Pakistan officials and Nikolay Shulginov did not specify the size of the planned purchases. “We have agreed that the payments will be made in the currencies of friendly countries,” Shulginov said at a joint news conference with Economic Affairs Minister Ayaz Sadiq, without elaborating. He said the two sides had drafted an agreement to sort out issues like transportation, insurance, payments and loadings, adding: “We have already established a timeline of this agreement in our joint statement which is late March.”

Shulginov said Russian gas companies might not be in a position at present to extend any supplies to Pakistan. “We have decided that it would be a good idea for Pakistan to approach Gazprom and Novatek, two largest LNG producing companies, in late 2023 to discuss the conditions when they have spare capacities,” he said.

Historically, Pakistan has had no major commercial relations with Moscow, unlike neighbouring India, and as a traditional US ally, it had been hesitant to do trade or any business with Moscow in the past.