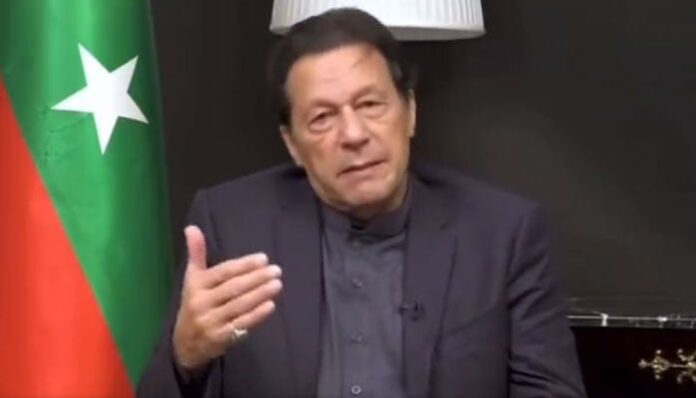 Castigating the economic policies of the coalition government, deposed prime minister and Pakistan Tehreek-e-Insaf (PTI) Chairman Imran Khan has warned that Pakistan can avoid default only by entering into a programme with the International Monetary Fund (IMF).

Before coming into power in 2018, Khan had been a severe critic of approaching the IMF and other countries for loans. In November 2015, he said: “I will prefer death over a begging bowl!”

Addressing PTI workers and supports via video link on Sunday, Khan said: “We have no other option but to enter the IMF programme.” He was flanked by former special assistant to the prime minister (SAPM) on poverty alleviation Dr Sania Nishtar.

Hitting hard the PML-N-led government’s economic policies, the deposed premier said over 0.75 million Pakistanis have left the county during the past seven months. “Industries are closing down due to the ongoing economic crisis.”

Inflation will further swell in days to come, he warned.

The PTI chief also urged the people not to leave the country in a difficult time, adding that nations fight together in hard times.

“My life is in danger but I will face [the challenges] by staying in the country,” he vowed, adding that they would fight in union against the “thieves” imposed on the country.

Wishing Happy New Year to the entire nation, the former prime minister asked the people to brace themselves for the difficulties coming ahead.

“Standing up is the only way out of the disaster,” Khan told the nation.

Slamming the coalition government over alleged dual laws — one for the poor and the other for the rich, the former prime minister said his party wants rule of law in the county.

The recent floods exposed the country’s governance system, he said. Speaking on the occasion, he also highlighted achievements of his past government.

Earlier, while talking about the prevailing political crisis in the county, the former prime minister reiterated that the PTI would not return to the National Assembly. He added that it would be a fruitless practice.

Lashing out at the establishment yet again, Khan said that three of their lawmakers were asked to remain neutral during the vote of confidence in the Punjab Assembly.

“The MQM factions are being united and Balochistan Awami Party (BAP) leaders are included in the PPP (to counter the PTI in the next election),” Khan added.

Stressing the need for free and fair elections, the PTI chairman said that transparent elections will bring stability to the country. He also slammed the “game of audio leaks” in the country.