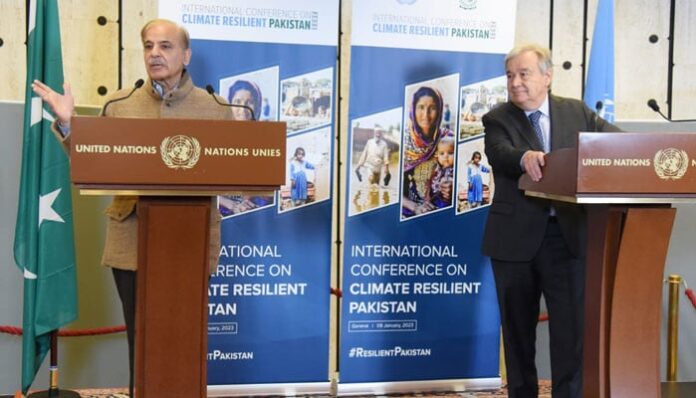 GENEVA/ISLAMABAD: Pakistan’s prime minister on Monday asked the IMF for a pause in its demands for economic reforms before releasing more financial aid, as the country tries to rebuild after catastrophic floods.

Shehbaz Sharif said he was trying to persuade the International Monetary Fund (IMF) to give Islamabad some breathing space as it tackles the “nightmarish” situation. The global lender wants Pakistan to withdraw remaining subsidies on petroleum products and electricity, aimed at helping the masses.

At the United Nations in Geneva for a conference on Pakistan´s recovery from last year´s catastrophic monsoon floods, Shehbaz was asked by reporters about the block on IMF funds. Pakistan´s economy has crumbled alongside a simmering political crisis, with the rupee plummeting and inflation at decades-high levels, but the floods and the global energy crisis have piled on further pressure.

Shehbaz came to office in April last year, ahead of the floods in July and August. A $6-billion IMF deal negotiated by the previous government was restarted after Pakistan finally met conditions such as ending subsidies on fuel.

But Islamabad has so far only received half the funds — the last payment in August — with a further review of the package ongoing. “Even before these floods hit Pakistan, we were already facing humongous challenges,” he said. “Yet we had to again connect with the IMF and resurrect an agreement which was violated by the previous government — and accept even harsher conditionalities,” said Shehbaz.

He said Pakistan was complying with the IMF´s conditions “as best as possible” but asked “how on Earth” the additional burdens could be shouldered by the country´s poorest. “Yet we are committed to IMF´s programme. We will do everything to comply with the terms and conditions. Though I am constantly trying to persuade them: please give us a pause,” he said.

Shehbaz spoke with IMF Managing Director Kristalina Georgieva on Saturday and asked her to “kindly be considerate and compassionate and give us some breathing space”, he said. “This is an ongoing dialogue. I´m sure one day soon we will be able to convince them through logic and through facts.

Meanwhile, the finance ministry said in a statement Finance Minister Ishaq Dar and IMF officials “discussed challenges to regional economies in the wake of climate change.”

The ministry added: “[The] finance minister reiterated the commitment to complete the Fund program.” “It was a good meeting but I do not have any statements to make,” Athanasios Arvanitis, deputy director of the IMF’s Middle East and Central Asia Department, told Reuters immediately after it ended.

Meanwhile, Bloomberg Economics reported Monday that cash-strapped Pakistan is still reeling from the troubles which aren’t over, however, it looks like the country of 220 million people will dodge default in the next six months.

While it seems like the resumption of the International Monetary Fund (IMF) programme will help the country sail through the end of June investors are worried about a big dollar debt repayment due in April 2024 and are pricing those bonds at a distressed level. This shows that Islamabad needs more external aid to meet its debt repayment obligations, reported Geo News.

Bloomberg Economics projected that the lender of the last resort — IMF — will release the remaining loan tranches totalling $2.6 billion, given Pakistan’s desperate need in the wake of cataclysmic floods, which caused damages worth $30 billion.

Moreover, a nod from the IMF will help unlock financing worth $5 billion from bilateral creditors and $1.7 billion from the World Bank. All these funds will help cover debt payments worth $5.9 billion and estimated twin deficits by the end of the ongoing fiscal year 2022-23.

However, a billion-dollar question that remains unanswered is how will Pakistan get through the 12 months after that when the country would need at least a total of $11 billion in financing — including an $8.8 billion estimated current account deficit and $2.2 billion in external debt repayments, among these a $1 billion dollar bond maturing in April 2024.

Currently, Pakistan has $5.6 billion in foreign exchange reserves — enough to cover the next five months of funding needs. The publication reported that external aid should boost the number to $14.9 billion. This should cover dollar payments only through March 2024 — leaving the April bond repayment in question.

The risk of default is why Pakistan’s bond due in April 2024 is trading at a 46% discount. The market’s risk assessment suggests the country will have to seek more external aid from the IMF and/or other creditors.