Ostrich eggs up to 7,500 years old found next to ancient fire pit in Israel 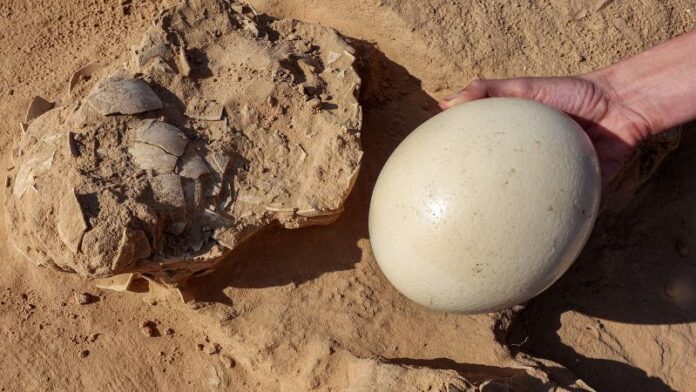 A well-known riddle compares an egg to treasure, asking: A box without hinges, key or a lid, yet inside golden treasure is hid. What am I?

And for archaeologists in Israel, eight prehistoric ostrich eggs – thought to be between 4,000 and 7,500 years old – proved as valuable as treasure when they were discovered near an ancient fire pit in the Negev, a desert region in the south of the country.

They were discovered during an archaeological excavation in the agricultural fields of Be’er Milka, the Israel Antiquities Authority (IAA) announced on Thursday.

The eggs’ proximity to the fire pit suggests that they were collected intentionally by the prehistoric desert nomads who used the campsite, according to a press release from IAA, although further lab analysis will provide more information about their uses and age.

“We found a campsite, which extends over about 200 sq. m (2,153 square feet) that was used by the desert nomads since prehistoric times,” Lauren Davis, the IAA excavation director, said in the release.

“At the site we found burnt stones, flint and stone tools as well as pottery sherds, but the truly special find is this collection of ostrich eggs. Although the nomads did not build permanent structures at this site, the finds allow us to feel their presence in the desert.”

Davis added that the campsites were covered over by the dunes, keeping the eggs exceptionally well-preserved.

The IAA, which told CNN on Thursday the site had been excavated in the last week, said that ostriches were common in the region until they became extinct in the wild during the 19th century.

Their eggs were ornately decorated and were prized items among the elite circles of Mediterranean civilizations during the Bronze and Iron Ages.

As well as being used as decorative items, ostrich eggs were also used in funerals, as water canteens and as a source of food.

“We find ostrich eggs in archaeological sites in funerary contexts, and as luxury items and water-canteens. Naturally, they were used as a source of food: one ostrich egg has the nutritional value of about 25 normal chicken eggs,” said Amir Gorzalczany, senior research archaeologist from IAA, in the release.

“It is interesting, that whilst ostrich eggs are not uncommon in excavations, the bones of the large bird are not found. This may indicate that in the ancient world, people avoided tackling the ostrich and were content with collecting their eggs.”