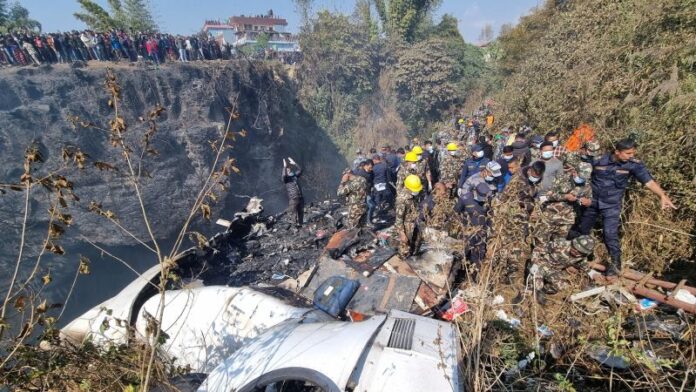 A Facebook Live video purportedly showing the last terrifying moments inside the cabin on Yeti Airlines flight 691 before it crashed in Nepal on Sunday has circulated widely online, as search and recovery efforts continue on the ground.

The plane crashed while en route from the Nepalese capital Kathmandu to Pokhara, a tourist gateway to the Himalayas. There were 72 people on board, including four crew members, according to an airline spokesperson.

With all but two bodies recovered, the crash marks the country’s deadliest air disaster in more than 30 years.

The video was purportedly live streamed from inside the plane by a passenger, Sonu Jaiswal, with footage beginning moments before the plane crashed. It shows a plane window with the wing seen outside as the aircraft banks sharply to the left.

At one point, seemingly unaware of the impending danger, Jaiswal turns the video to himself, smiling slightly amid chatter and laughter in the background. Several passengers can be heard conversing excitedly in a mix of Hindi and Punjabi; one person says, “Look at that body of water, it’s excellent,” as the plane passes by a lake.

The mood inside the plane appears calm, with no emergency warnings from the pilot or airline crew. Seconds later, the video abruptly starts shaking with shouts heard; the camera loses focus, only showing flashes of light and loud noise, before the scene erupts in fire.

CNN has corroborated the video based on geolocation, a flight manifest and information on the Yeti Airlines website.

Jaiswal is listed as a passenger on the flight manifest, and the seat number listed for him on the airline website matches the visuals taken from inside the plane.

A close friend of Jaiswal in India, Arman Ansari, also confirmed it was Jaiswal seen in the video. He added that he was watching a Facebook Live stream from Jaiswal during the flight.

“We were watching it. We had watched for just a few seconds and then it got cut. We did not think much about it,” he said.

Aryaka Akhouri, the chief of Gazipur district in India where Jaiswal lived, said she had spoken to Jaiswal’s parents, and confirmed he was on the plane and the one filming the video.

A spokesman for Civil Aviation Authority of Nepal (CAAN) has said the video is not from Sunday’s crash. When pressed, he said he and his team had no technical evidence to support that claim. Instead, he pointed to passengers laughing at the first sign of turbulence before panic set in seconds later as evidence it could not be the Yeti Airlines flight.

Aviation analyst Mary Schiavo told CNN the video could be helpful in the investigation, saying it could have captured details not recorded in the plane’s black box. For instance, the aircraft’s flap, which gives extra lift during landing, “does not look like (it’s) fully extended,” she said.

She added that what seems to be the sound of an engine suggests “they had power to at least one engine.”

Search and recovery efforts continued on Tuesday for the two people still missing, according to Nepali police. District police chief Ajaya KC said foggy weather was making the search difficult and authorities planned to use drones to locate those missing when the weather improves.

Meanwhile, an investigation into the cause of the crash is ongoing, with assistance from French investigators who will be on site by Tuesday. The plane’s black box, which records flight data, was recovered on Monday and would be handed to CAAN, officials said.

Aviation authorities said Tuesday that the pilot of the plane had asked air traffic controllers for a change of runway just minutes before the aircraft went down.

Pokhara airport has two runways that pilots can choose between when landing and the pilot’s request had been accepted, CAAN spokesperson Jagannath Niroula said.

“When the Yeti Airlines pilot asked the tower if he can take the second runway to land, the tower approved it,” he said. “The tower controllers didn’t ask why the pilot wanted to use a different runway than originally planned since it wasn’t an issue technically from their end which runway the pilot chooses to land,” Niroula told CNN.

No distress calls were reported from the pilot to the Pokhara airport tower controllers, he added.

In Kathmandu and Pokhara, crowds held candlelight vigils for the victims on Monday.

Of the bodies recovered, at least 41 have been identified, Yeti Airlines said in a statement Monday. Some bodies will be handed over to their families in Pokhara, while others – including those of foreign nationals – will be airlifted to Kathmandu on Tuesday, police said.

Fifteen foreign nationals were aboard, hailing from India, Russia, South Korea, Australia, Ireland, Argentina and France, according to CAAN.

Videos on Monday showed grieving families in Pokhara, waiting outside the hospital where autopsies are being conducted. The postmortems were delayed because a team of forensic experts didn’t reach Pokhara until Monday afternoon, according to police and airline officials.

Some families have begun speaking out about the loss of their loved ones. In a statement Tuesday, the family of Australian victim Myron Love said the 29-year-old teacher had been a keen cyclist who “lived life to the fullest.”