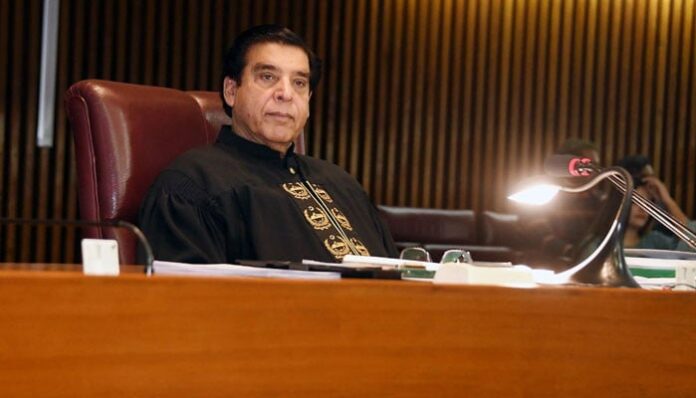 ISLAMABAD: In another major development in ongoing power politics, the National Assembly (NA) Speaker, Raja Pervaiz Ashraf, on Tuesday approved the resignations of 34 PTI Members of the National Assembly besides Awami Muslim League (AML) chief Sheikh Rashid Ahmad. Immediately, following the acceptance of the resignations, the Election Commission of Pakistan (ECP) de-notified them.

The top leaders of the PTI were among those 35 MNAs whose resignations were accepted by the NA Speaker.

From Bhakkar, the resignation of Sanaullah Khan Mastikhel has been accepted.

While the resignations of Aliya Hamza Malik and Kanwal Shauzeb Khan from women reserved seats were also accepted.

It may be mentioned here that the NA speaker had already accepted the resignations of 11 members of Pakistan Tehreek-e-Insaf (PTI) on July 8, 2022.

Reacting to the coalition government’s move, PTI Senior Vice-President Fawad Chaudhry thanked NA Speaker Pervaiz Ashraf for accepting the resignations of his party’s lawmakers, reported Geo News. Fawad hoped that the Chief Justice of Pakistan would decide his party’s pending cases in this regard soon.

Meanwhile, Pakistan Muslim League-Nawaz (PMLN) senior leader and Interior Minister Rana Sanaullah on Tuesday said his party would not contest the by-elections on the 35 National Assembly seats that fell vacant as the Election Commission of Pakistan (ECP) de-notified the lawmakers after Speaker Raja Pervaiz Ashraf accepted their resignations earlier Tuesday.

Speaking in the Geo News programme Capital Talk, Sanaullah asked who would contest the elections for a span of “only two or three months”.

He reiterated that the government would complete its constitutional term that would end in August 2023. The minister said the speaker took the decision as the PTI lawmakers did not appear before him in person despite being invited multiple times for verification of their resignations.

On a query, the minister said that postponement of elections in Punjab was not out of the question but they should prepare for the polls.

Reacting to the development, Pakistan Democratic Movement President and Jamiat Ulema-e-Islam–Fazl chief Maulana Fazlur Rehman said that the ruling alliance would not contest the by-polls on the vacant seats. Reasons for not contesting the election will also be unveiled soon, he added. Also, PTI’s senior leader Chaudhry Fawad Hussain said in a tweet on Thursday that PTI will contest on all the 34 seats vacated after the approval of resignations by the National Assembly speaker. He added the PTI chief Imran Khan will contest election on all those seats.