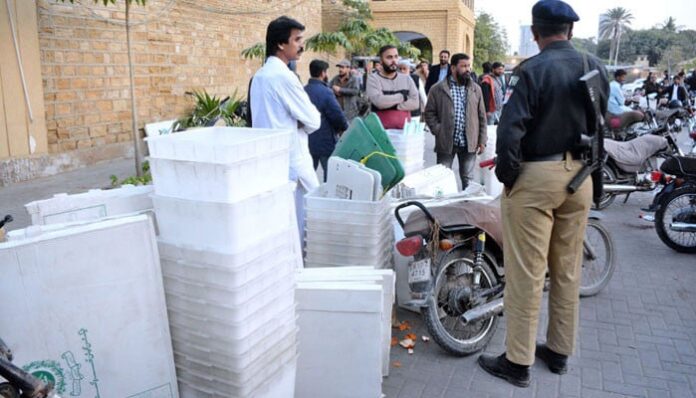 KARACHI/ ISLAMABAD: After day-long consultation meetings with provincial government, officials of the Election Commission and other stakeholders, Muttahida Qaumi Movement-Pakistan (MQM-P) late on Saturday night announced the boycott of the local government elections scheduled today in Karachi and Hyderabad.

After the failure of talks held between MQM-P Convener Khalid Maqbool Siddiqui and Chief Minister Syed Murad Ali Shah at the Governor House, Siddiqui, along with party leaders, reached Bahaduabad to address a press conference.

He said delimitation was the responsibility of the election commission but it failed to perform its duty. “In an election in which voters lists are flawed, constituencies not corrected, how can we accept the results of polls? The ECP failed to properly manage the voters lists and correct the delimitations.” He declared: “We refuse to accept the results of the fake local bodies elections.”

Siddiqui said for the last six to eight months, they had been raising voice against the injustices in Karachi and Hyderabad. “But we were not heard though we were the largest players. Our aim was not to elect the mayor of MQM-P but we wanted to raise voice for the right of Karachi people and true representation of the city.

“I believe that there is a national consensus against the Mohajir nation, the MQM-P and urban centres of the province,” said Siddiqui, adding that Mohajirs were the guards of the ideology of Pakistan. He said some powers were trying to suppress the voice of the middle class of the country. “Because of not getting justice and apathy of the Election Commission, we are withdrawing from today’s elections,” the MQM-P convener announced. He said all democratic residents of Karachi and Hyderabad, be they Sindhis, Baloch, Pathan and Mohajir, should raise concern over not getting rights and stay at home to support the MQM-P’s boycott.

Responding to a question, Siddiqui said the next mayor of Karachi would be elected due to the “charity offered by the MQM-P” by boycotting the elections. To a question, MQM-P convener Khalid Maqbool Siddiqui said the decision to boycott the elections should not mean that the MQM-P was quitting the federal government. He explained that the party would remain in the federal coalition for the sake of continuity of the democratic process.

MQM-P leaders Farooq Sattar, Syed Mustafa Kamal, Faisal Subzwari nd others accompanied Dr Siddiqui at the media talk. Responding to the MQM-P’s boycott, Sindh Information Minister Sharjeel Memon told Geo News that the Pakistan Peoples Party was sorry to hear the boycott announcement by the MQM-P because it wanted them to contest the polls. He added the PPP did its best to address the reservations of the MQM-P. He asked the party to reconsider its decision.

Federal Interior Minister Rana Sanaullah also lamented the MQM-P’s decision to boycott the polls. He, however, remarked that the MQM-P’s reservations were genuine and the party had approached every forum to resolve the problem of delimitation.

The ECP meeting directed the provincial government to make foolproof security arrangements for the conduct of peaceful elections. Citing intelligence reports indicating threat to different political leaders and workers, the government of Sindh made an effort to get the polls further delayed.

According to sources, the Sindh government, in a letter, besides threats to politicians and workers, also pointed out that the required strength of army and Rangers personnel for elections was not available.

The letter stated that the ECP, in its January 13 order, gave “no response to the concerns of the provincial government regarding the non-availability of Pakistan Army and civil armed forces” for the smooth conduct of polls. It added that a meeting was held at the office of Sindh chief secretary on Friday, which was also attended by the ECP secretary as well as senior officers of law enforcement and intelligence agencies.

“In this meeting, the law enforcement and intelligence agencies apprised the participants of the precarious law and order situation along with specific threats to various political leaders and workers of political parties.” It further added that the meeting further corroborated the fear and apprehension of the government that due to the present situation, there was a greater need for the presence of troops of Pakistan Army and civil armed forces to be statically deployed at the polling stations.

This is the second time in as many days the Sindh government had requested to defer the polls to placate the Muttahida Qaumi Movement-Pakistan (MQMP), which has warned to quit the coalition government if its grievances related to delimitation were not addressed before the polls.

CEC Raja, meanwhile, urged the people of Karachi and Hyderabad to take part in the polling process and express faith in democracy.

In a message, he emphasised that the establishment and stability of local bodies was essential for democracy and the country’s development.

“The patriotic people of Karachi and Hyderabad are requested to express their faith in democracy by participating in tomorrow’s local bodies elections,” he contended and added voters and people should ensure a peaceful election environment in the LG polls.

The ECP, he said, would ensure that any interference and mischief in the election process was dealt with strictly.

The CEC said the Election Commission, election staff and all law enforcement agencies will definitely live up to the trust of the people of Karachi and Hyderabad.

In a related development, the ECP has established a central control room for three days at the Islamabad Election Commission Secretariat to oversee the LG polls. The central control room started functioning from Saturday and would continue to work uninterrupted till the results of elections are out. Senior ECP officials would monitor the election process.

Likewise, the ECP secretary and special secretary will oversee the election process from the office of provincial election commission, Sindh, in Karachi.

Talking to journalists, Sindh Election Commissioner Aijaz Chohan, meanwhile, said: “A strategic deployment process at around 500 sensitive polling stations is being made where Rangers personnel will be deployed and IGP (inspector general of police) has been asked to work out a plan in this regard.” He conveyed the message to voters that polling would take place, so they should come out to vote. “The ECP is ready to fulfil its constitutional duty,” Chohan said.

In a statement, the electoral watchdog issued guidelines for voters, stating that the voters should bring their original Computerised National Identity Card (CNIC) along in order to cast the vote. The polling time is from 8am to 5pm.

The ECP noted that even expired CNICs would be accepted for casting votes, but a photocopy will not be accepted. “The details will be checked in the electoral list according to the CNICs by the polling staff,” it added.

The voter’s name and serial number will be called aloud in front of the polling agent and thumbprint will be taken before the mentioned name. Later, the nail bed area on the thumb will be marked with indelible ink.

The voter will be given three coloured ballot papers out of which, the green will be for the assistant presiding officer of the Union Council, the blue paper for the District Council and the white for the general member.

He said the opposition among the political parties is alarming as two parties are in favour of holding the LG polls and two are against it.

There are chances of clashes between the political parties on the issue of LG polls and terrorists can benefit from this uncertain situation.

Rana Sana urged all the political parties to resolve the issue with reconciliation and dialogue. In response to the ECP’s request, the Interior Ministry, meanwhile, approved the static deployment of Frontier Constabulary outside at all the highly sensitive and sensitive polling stations to ensure the smooth conduct of said elections.

“The exact number of troops, date and area of deployment will be worked out by the Election Commission of Pakistan, Home Department, Government of Sindh, in consultation with Frontier Constabulary authorities, on the basis of on-ground requirement/assessment,” the letter read.

In line with the Interior Ministry’s approval, as many as 20 Frontier Constabulary (FC) platoons have been provided to the Sindh Police to assist in ensuring security during the LG polls in Karachi and Hyderabad, FC Commandant Salahuddin Mehsud said taking to Geo News. “Over 800 personnel have been given to Sindh as per the federal government’s directives,” Mehsud said.

According to the spokesperson of the provincial police, more than 43,605 law enforcement officials and personnel will perform their duties under the security plan devised by the Sindh government.

AS many as 26,050 officers and personnel will be deployed on election duty at 4,997 polling stations in the Karachi city.

As per the data available with local media, a total of 8,857 polling stations have been set up in three divisions of 16 districts across Sindh, out of which 8,153 have been declared sensitive.

Almost 17,863 candidates will compete against each other in the LG elections. Almost 49 candidates have passed away before the elections.

Meanwhile, at least 727 candidates, seven from Karachi, 410 from Hyderabad and 310 from Thatta, have been successfully elected unopposed in the three divisions.