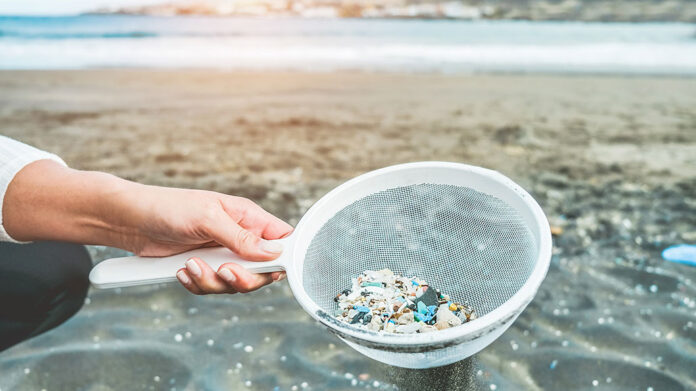 Waterborne-plastic bits may provide safe havens for viruses, new research shows. Viruses hitchhiking on plastic also stay infectious longer than do those floating freely in water. Furthermore, the protection that plastic affords viruses increases as the plastic breaks down. That means the problem may worsen before it gets better.

Drifting specks of plastic — called microplastics — make up about 80 percent of ocean litter. For 10 years or more, studies have been showing that long-lasting plastic trash can serve as homes for germs. But until recently, bacteria had been the focus of such research. New studies now extend those findings into the viral world.

Last year, researchers at the New Jersey Institute of Technology in Newark reported that microplastics can act as way-stations that host bacteria resistant to antibiotics. Such germs can then wind up in shellfish. When handled or eaten by people, these germs can trigger human disease. Many of these bacteria live in slime-coated colonies called biofilms. Bacteria protected by a biofilm survive longer on microplastics than do free-floating bacteria. That was the finding of a study published this past May.

But “what about the viruses?” asks Manfred Weidmann. He’s a virus expert at Brandenburg Medical School in Senftenberg, Germany. Viruses can attach to plastics, too, he notes. For example, as early as 2007 they had been seen glomming on to plastic bottles.

To Weidmann and his team, this suggested microplastics might be able to protect viral hitchhikers. When the COVID-19 pandemic turned a spotlight on viral disease, his team and others began testing this idea. What they found points to yet another risk posed by micro-bits of plastic pollution.

Researchers at the University of Queensland in Brisbane, Australia, studied how viruses attach — or adsorb — to the surface of microplastic bits. “We did a very in-depth adsorption study,” says Ji Lu. He is a microbiologist at the school’s Australian Centre for Water and Environmental Biotechnology.

Using a special green dye, his team made the viruses glow. They didn’t use viruses that infect people. Instead, they used a bacteriophage (Bak-TEER-ee-oh-fayj), or phage for short. That’s a specialty virus — one that infects bacteria. The phage they used is called T-4.

Lu’s group mixed T-4 phages with plastic beads in water. Then they removed the beads and measured the water’s luminescence. This told them how many free-floating viruses were left. From that, they figured out how many viruses had been adsorbed. The team ran the tests using different sizes of plastic bits. They also tested new plastic against old plastic. As the plastic bits got smaller the virus stuck to them more effectively. Up to 98 percent of the viruses adsorbed to the smallest pieces, the team found.

It makes sense that smaller microplastics adsorb more viruses, says Weidmann. Viruses attach to surfaces. And the smaller a bead gets, the more of its mass is now part of the surface. As plastic bottles crumble, the total amount of plastic stays the same. But the surface area increases. As a sweeter example, imagine a sugar cube in water. All four sides of the cube touch the water. But what if you crushed that sugar into powder? Crushing it hasn’t changed the amount of sugar. But the amount of surface touching the water has increased. That also explains why powdered sugar would dissolve faster than a cube of sugar.

Many tiny plastic bits add up to a larger total surface onto which viruses can attach. This study was published in the October 2022 Water Research.

Educators and Parents, Sign Up for The Cheat Sheet

Thank you for signing up!

There was a problem signing you up.

But what’s the ‘real situation’?

But wait, Weidmann says. This study didn’t look at the “real situation.” It looked only at “naked” microplastic — by which he means pure plastic. In the ocean, he points out, plastic is being bathed in what is “basically a soup of microorganisms.”

Tamar Kohn agrees. She wasn’t a part of Weidmann’s study. But she’s an environmental engineer at the Swiss Federal Institute of Technology in Lausanne. Tiny plastic bits will get coated with scum, she says. Then bacteria colonize the scum. In short order, those bacteria go on to form biofilms.

Do viruses adsorb to such biofilm-coated plastics? Yes, Weidmann’s group finds. All the different types of viruses they tested stuck to biofilm-coated plastic. And they included one (rotavirus) that gives monkeys a diarrheal disease. This virus is similar to rotaviruses that can infect humans. The team shared its findings in the October 2022 Environmental Pollution.

Viruses differ in major ways, says Tatiana Prado. She’s a virologist at the Oswaldo Cruz Institute in Rio de Janeiro, Brazil. For one thing, the surface chemistry on viruses may vary. And that can change how well the virus sticks to plastic. For the naked plastic study — which used only the T-4 phage — testing different viruses in follow-up studies will be important.

Kohn agrees. T-4 is very different from most viruses. It even looks different. The T-4 phage looks like a spider. Most human viruses, in contrast, are ball-shaped. To assume another virus will act like the T-4 phage, she says, “is a big stretch.”

Next, Weidmann wanted to know, do viruses “retain their infectivity” when stuck to plastic?

Weidmann and Lu’s teams knew how many viruses had glommed on to plastic bits. The question was whether those viruses were essentially “dead” or could in fact infect a living host. To test that, both teams removed the plastic-adsorbed viruses and mixed them with healthy cells. Then they looked to see how many cells got infected. Weidmann’s team tested viruses from biofilm-colonized plastic. Lu’s team tested viruses from naked plastic.

After 10 days, Lu’s group found, fewer than one free-floating virus in 100 could still infect cells. “In comparison,” Lu notes, more than two in every three adsorbed viruses “still retained their activity.”

Weidmann’s team tested virus infectivity after only two days. It, too, worked with two major classes of viruses — enveloped and non-enveloped types.

The enveloped type is more fragile. That envelope “doesn’t actually have any shielding properties,” explains Kata Farkas. She’s a virologist at Bangor University in Wales, part of the United Kingdom. In contrast, non-enveloped viruses are armored in “a super-stable, really well-structured protein shield,” she notes. The coronavirus that causes COVID-19 is an example of an enveloped virus. Rotavirus is a non-enveloped one.

And glomming on to plastic bits prolonged the infectivity of both types of viruses, Weidmann’s team now reports.

How does plastic protect viruses?

Lu has ideas for how this protection works. T-4 phages have what looks like a tail. These viruses use their tail, Lu explains, to identify and attack cells. And under a microscope, Lu’s group saw that these viruses stuck to plastic with their tail-side down. That would seem to shield this important structure.

That may explain something Lu’s team discovered: old, sun-aged plastic adsorbed and protected viruses better than new plastic. Why? It seems to involve changes to the plastic molecules. In particular, Lu’s team found changes in the types of clustered atoms — called functional groups — that cover the surface.

Natalia Lanzarini is a virologist at the Oswaldo Cruz Institute in Rio de Janeiro, Brazil. She finds the functional group part of Lu’s study interesting. “We want to understand why the virus connects,” she says. And these findings hint at what role a plastic’s chemical makeup plays in this.

“In principle,” Weidmann says, these studies suggest that “viruses can attach to plastic beads, which are covered with bacteria. And yes, they stay infectious.” The Australian study suggests that may be true for naked plastics, too. But what does this all mean for human health?

Says Weidmann, “We’ll have to wait and see.”

If viruses from a diarrhea epidemic spill into the sea and attach to plastic, could swimmers get infected? That’s a possibility, Weidmann says. But lots could happen before that. The next steps, he says, are to “take samples from the environment. And then try to monitor how their infectivity holds up.”

Microplastics are not unique in adsorbing viruses, Farkas points out. Even simple soil particles do that. But plastics are relative newcomers to our planet. Many break down into smaller pieces, but often won’t truly degrade into something else for a very long time.

So drifting ocean plastic might ferry viruses a long way. Across entire oceans, perhaps? These new studies prompt such concerns. “Science is always a discussion,” Weidmann says. “What people don’t get,” he adds, “is that science is not about ‘these-are-the facts-and-they’re-enshrined-and-holy.’” Rather, he says, science is turning up “the current facts.”

Lanzarini at the Oswaldo Cruz Institute agrees. Details may change as new data come to light. This is a “new and emerging research area,” she says. She and others want to know what conditions might cause a virus to persist. And in terms of that persistence, she says, “we want to understand why the microplastics are important.” Understanding this will help scientists gauge whether dangers posed by microplastics are greater than any other bits of debris.

“The consumption of plastics has grown exponentially in recent decades,” Prado says. “And the environment has been suffering the consequences.” So, what can we do to help?

Prado has some ideas. Governments “should encourage environmental education in schools.” And we must use less plastic, she says — especially in packaging. Society should also encourage research on producing alternatives to plastics that are truly biodegradable, she says.

Can a robot ever become your friend?