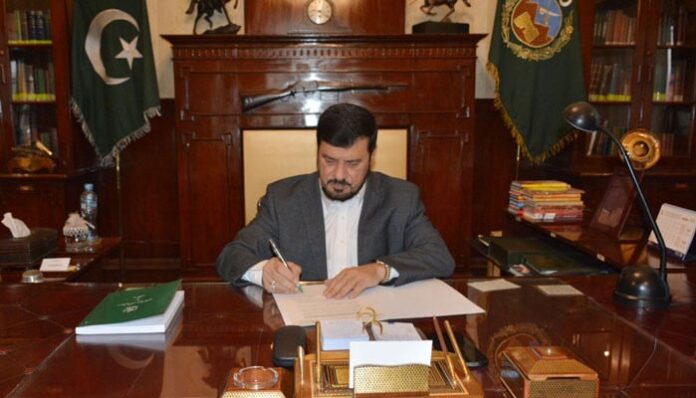 “I, Haji Ghulam Ali, Governor of the Khyber Pakhtunkhwa, under clause (1)of Article 112 of the Constitution of Islamic Republic of Pakistan, 1973, dissolve the provincial assembly of the Khyber Pakhtunkhwa, with immediate effect. Henceforth, the provincial cabinet also stands dissolved,” the governor wrote in a letter sent to CM Mahmood and Leader of the Opposition in the outgoing assembly Akram Khan Durrani.

The letter further mentioned that in terms of Clause (4) of Article 224-A of the Constitution, “the incumbent chief minister Mahmod Khan shall continue to hold office to perform day-to-day affairs of the province till the appointment of the caretaker chief minister.”

The PTI chairman had announced the dissolution of the assemblies — Khyber Pakhtunkhwa and Punjab — in November last year. However, the plans were delayed due to consultations with allies and countermeasures adopted by the ruling allies in the centre.

Following the months-long delay, both Punjab and Khyber Pakhtunkhwa assemblies now stand dissolved and the elections would be held in 90 days.

‘PTI to return to power with two-thrid majority’

A day earlier, in a video statement, the KP chief executive said: “I promised Imran Khan that I would sign the summary for the dissolution of the provincial assembly and I did.”

He stated: “We have done whatever we could for our people. Now, the assembly will be dissolved and elections will be held within 90 days.”

The PTI would return to power with a two-thirds majority not only in the province but across the country, he added.

After sending the summary to the governor, CM Khan said he governed KP for four years and three months as per Imran Khan’s vision and directives.

“We did whatever we could for our people,” the chief minister said in a video statement regarding the dissolution of assemblies.

“God willing, we will win again with two-third majority and form the government, not only in KP, but across the country,” Mahmood Khan said with hopes to form a government based on their performance.

How is the interim CM appointed?

Article 224 of the Constitution explains the process of appointment of a caretaker government at the centre and provinces.

Since the polls are being held in Khyber Pakhtunkhwa, we shall consider only officials at the provincial level in the caretaker government.

Until the formation of a caretaker government, Mahmood will continue his duties as the CM albeit for a few days.

It is only the incumbent Khyber Pakhtunkhwa Assembly speaker, out of all elected representatives, who will hold his position until the newly-elected lawmakers take an oath and elect his replacement.

For the formation of a caretaker government, CM Mehmood will write to the leader of the opposition in the KP Assembly, within 48 hours of the dissolution of the assembly, seeking three names for the caretaker chief minister and will suggest three names himself.

If an impasse, between the two leaders, lasts for three days, then the speaker will form a committee comprising six members of the outgoing assembly with equal representation from the treasury and the opposition.

To the committee, the CM and the leader of the opposition will forward two nominees each.

The committee then will have three days to evolve consensus on one name. If that fails as well then the names of the nominees will be referred to the Election Commission of Pakistan for a final decision within two days.

The selected nominee will perform his/her duties as the interim CM until the formation of a new government in the province. The interim CM also has the power to induct his own cabinet.

Following the placement of a caretaker chief minister, the Election Commission of Pakistan (ECP) is bound to carry out general elections in the province within 90 days.

The electoral body can hold polls within 22 to 45 days because constitutionally it requires at least 22 days to scrutinise the nomination papers of the candidates.

The candidates will be given 29 to 30 days to run the election campaign.