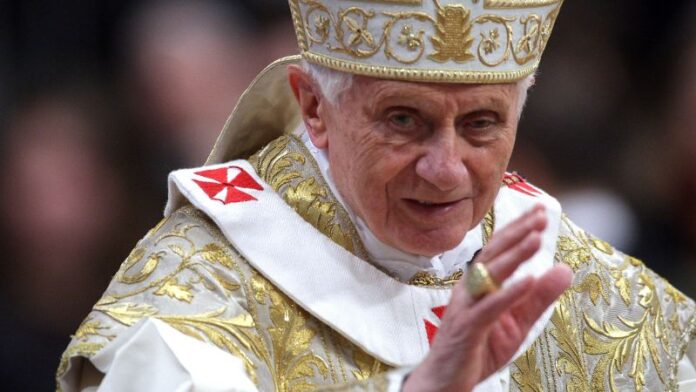 Pope Emeritus Benedict XVI, whose death at 95 was announced Saturday, was a powerful intellectual force who shaped the Catholic Church’s theology for more than a quarter century before shocking the world by resigning in 2013.

While not quite unprecedented, Benedict’s resignation was highly unusual. Popes typically hold office until death, and the last pope to step down was Gregory XII, who quit in 1415 to end a civil war within the church.

In typical fashion, Benedict announced his unexpected resignation in Latin. He was 85 at the time and cited his advanced age as ill-suited for the demands of running the Catholic Church.

The German-born Benedict saw himself, and the church, as a bulwark against secular trends in Western society, particularly what he called the “dictatorship of relativism.” He often insisted that Catholics maintain a fortress mentality, saying perhaps a smaller, “purer” church would best maintain Catholicism’s traditions and teachings.

As Pope, Benedict was a polarizing figure. He was hailed by conservatives who admired his erudite writings and careful theology. But critics, particularly in the postmodern West, called him “God’s Rottweiler” for his staunch insistence on fidelity to church’s doctrine and his willingness to silence dissent.

“He policed the boundaries of the faith,” said David Gibson, author of “The Rule of Benedict,” a biography of the former pope. “He was brilliant and brutally effective.”

Benedict also came under fire for his handling of the sexual abuse crisis that engulfed the Catholic church during his years as a senior cleric. A damning report published in January 2022 found that he knew about priests who abused children but failed to act when he was archbishop of Munich from 1977 to 1982.

Joseph Ratzinger was born and raised in Bavaria, where he briefly served in the Hitler Youth, despite his objections, and the German military during World War II. His father, a policeman, loathed the Nazis, according to biographers.

Ratzinger, like his elder brother Georg, saw their future in the Catholic Church, entering a German seminary in 1945. Once ordained, Ratzinger rose quickly through the church, establishing himself as a leading theologian. Originally a liberal thinker, he turned conservative in 1968 in the wake of the Second Vatican Council, which upended a number of Catholic teachings.

In 1977, Ratzinger was appointed Archbishop of Munich and Freising. Later that year, former Pope Paul VI made the German scholar a cardinal, a sign of his growing reputation within the church.

From 1981 to 2005, Ratzinger ran the Vatican’s influential Congregation for the Doctrine of the Faith (CDF), the office responsible for stating and policing church doctrine. He was, in effect, Catholicism’s chief theologian during this time, said Gibson, Benedict’s biographer.

“His twenty-four years at the CDF were far more influential than his tenure as pope,” Gibson said.

His influence was certainly felt in the United States. In 1984, Ratzinger told the Order of Preachers, also known as the Dominicans, to investigate one of its monks, Matthew Fox, for heresy. The Vatican expelled Fox from the order in 1993.

In 1999, Ratzinger effectively silenced an American nun and priest engaged in LGBTQ ministry because they would not affirm the “Church’s teaching regarding the intrinsic evil of homosexual acts.” The nun and priest were “permanently prohibited from any pastoral work involving homosexual persons.”

But Ratzinger eventually tired of the job, reportedly asking Pope John Paul II to appoint him as a librarian at the Vatican’s library. John Paul refused.

Ratzinger was dean of the College of Cardinals in 2005 when he became the sixth German to be picked as pope, the first since the 11th century. At the time, the church was facing several pressing issues, including declining popularity in parts of the world and a growing crisis over its role in handling sexual abuse accusations against priests.

As the conclave to appoint Pope John Paul II’s successor went on, Ratzinger said he quickly realized that he would be elected as the new Pope – though he was reluctant to assume the mantel of St. Peter.

Upon his election, Ratzinger took the name Benedict XVI as a nod to church history, he said. He chose the name to honor Benedict XV, who pursued peace during World War I, and the original St. Benedict, a monk “whose life evokes the Christian roots of Europe,” Ratzinger said.

At 78, he was the oldest person to have been elected pope since Pope Clement XII in 1730. Given his age, Benedict XVI was widely seen as a caretaker pope, a bridge to the next generation after the long tenure of John Paul II, a globe-trotting pontiff whose early youth and vigor gave way to such frailty in later years that he required help walking and was often hard to hear during public addresses.

In his tone, demeanor and actions, Benedict was notably different from his predecessor. Where John Paul wowed crowds around the world with his mastery of numerous languages, Benedict’s influence was felt through his erudite writings and theological rigor.

“In a world which he considered relativist and secular, his main thrust was to re-establish a sense of Catholic identity for Catholics themselves,” said Delia Gallagher, CNN’s Vatican correspondent.

As Pope, Benedict often championed a back-to-basics approach. Three of his encyclicals – letters from the Pope to Catholics around the world – were based on the theological virtues of faith, hope and love.

Bill Donohue, of the conservative US Catholic League, credited Benedict for working to reduce friction among adherents of various faiths, something that was a key part of John Paul’s mission as well.

But critics say Benedict didn’t always choose his words wisely. During a speech in Regensburg, Germany in 2006, he quoted a 14th century Byzantine emperor who criticized Islam, calling it violent, “evil and inhuman.”

His remarks were sharply criticized by heads of states in the Middle East and Muslim groups throughout the world. Effigies of Benedict were burnt in Basra, Iraq, and elsewhere in predominantly Muslim countries.

Benedict later apologized, saying he was “deeply sorry for the reactions in some countries to a few passages of my address.”

Benedict became pope at the height of the molestation scandal involving Catholic priests, as complaints of sexual abuse and related lawsuits tore at the church and threatened its moral standing around the world.

In 2002, he asked Pope John Paul II to route all accusations of sexual abuse to his office, where he instituted changes meant to deal swiftly with accused priests. From 2004-2014, the Vatican defrocked 848 priests who raped or molested children and sanctioned another 2,572 with lesser penalties, according to the church. During that time, his office had received 3,400 accusations, according to the church.

The flood of accusations worldwide has waned at times but has never stopped.

In 2008, Benedict acknowledged “the shame which we have all felt” over abuse reports and said those responsible for the “evils” should face justice. Two years later he said abusive priests “disfigured their ministry” and brought “profound shame and regret” on the church.

That same year, 2010, he issued new rules aimed at stopping abuse. These included allowing church prosecution of suspected abusers for 20 years after the incidents occurred, up from 10 years previously. The rules also made it a church crime to download child pornography and allowed the pope to remove a priest without a formal Vatican trial.

In some cases, Benedict acted swiftly, as when he removed Marcial Maciel, a powerful Mexican priest who founded the conservative Legion of Christ, after years of allegations that he had sexually abused children.

“No one did more to successfully address the problem of priestly sexual abuse than Joseph Ratzinger,” Donohue said.

But others such as the late Barbara Blaine, the former president of Survivors Network of those Abused by Priests, said the opposite was true.

“I would hate for him to be remembered as someone who did the right thing because from our perspective, Pope Benedict’s record has been abysmal,” said Blaine, who died in 2017.

Also in 2010, the Times reported that the future pope – while serving as the archbishop in Munich – had been copied on a memo informing him that a priest accused of molesting children was being returned to pastoral work. At the time, a spokesman for the archdiocese said Ratzinger received hundreds of memos a year, and it was highly unlikely that he had read it.

Twelve years later, a Church-commissioned report into abuse by Catholic clergy in the diocese found that Ratzinger had as archbishop been informed of four cases of sexual abuse involving minors – including two that had taken place while he was in office – but failed to act. In a letter published by the Vatican in February 2022, Benedict issued a general apology to survivors of abuse, writing: “Once again I can only express to all the victims of sexual abuse my profound shame, my deep sorrow and my heartfelt request for forgiveness.”

Over the years, victims’ groups pressed the International Criminal Court to prosecute Benedict in the sex abuse scandal.

David Gibson, Benedict’s biographer, said that, like many in the Vatican, the former pope was initially slow to recognize the magnitude of the church’s abuse crisis.

“Like so many in the church, he was part of the learning curve,” Gibson said.

Ultimately, however, Benedict showed little skill or interest in governing the vast and complex world of the Catholic Church, Gibson said.

In 2012, his butler was convicted of theft for leaking confidential papal documents to fight what he saw as deep corruption within the Holy See.

Since then, Benedict, who chose the name Pope Emeritus and continued to wear the traditional papal white, rarely left his monastery high on a hill in Vatican City, where he promised to live a “hidden life.”

Still, conservative Catholics tried to draw Benedict out, or at least use him as counterweight to the more liberal papacy of Francis. Some Catholics looked to him as an anti-Pope, or at least an anti-Francis.

The contrast between the two men was dramatized in a 2019 Netflix film, “The Two Popes,” which earned Anthony Hopkins an Oscar nomination for his portrayal of Benedict.

The Rev. Joseph Fessio, an American Jesuit who studied under Benedict and has published his works at Ignatius Press, said the former Pope likely knew that conservatives were trying to pit him against Francis.

“In some ways, he has become the face of ‘the Resistance,’” Fessio said, “even though he hasn’t done anything to be a resistor.”

Benedict preferred to be called something more modest.

“I am no longer the Pope but I am still in the church,” Benedict said. “I’m just a pilgrim who is starting the last part of his pilgrimage on this earth.”