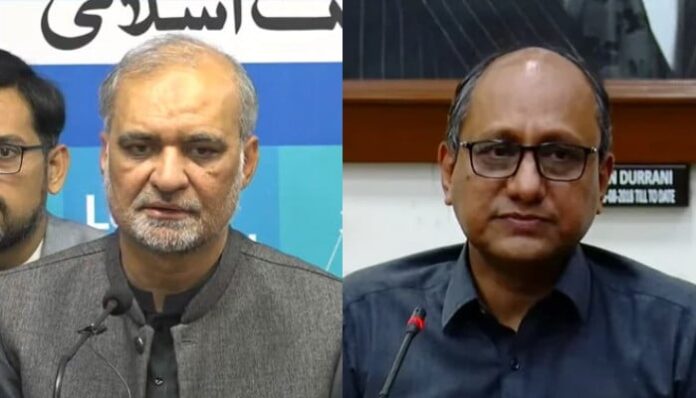 Jamat-e-Islami (JI), the runners-up in the local government elections in Karachi, has announced protests in all big cities of Pakistan as it rejected the outcome of the polls.

The Election Commission of Pakistan (ECP) issued the results of all the 235 Union Councils in Karachi (UC), according to which Pakistan Peoples Party is in the lead with success in 93 UCs. JI stands second with victory in 86 UCs, with Pakistan Tehreek-e-Insaf (PTI) coming third on 40 UCs.

The results of the LG polls that came in unusually late — over 24-hours after the voting concluded — were rejected by most of the contesting parties with claims of rigging.

JI chief Siraj-ul-Haq, while talking to the media Monday night, said that the delay in the release of results by the ECP was raising doubts.

He said that JI emerged as a big party in Karachi’s LG elections.

“The polling agents’ results are clear that JI has a majority,” Haq claimed.

He appealed to hold protests in all big cities of the country against the “rigging”, saying that the results of other parties were also being engineered.

JI’s spokesperson Qaiser Sharif also said that the party has given a call for countrywide protests today (Tuesday). He said that Haq has also called a meeting in Mansoora to plan a strategy regarding the grass-root level elections in the port city.

Meanwhile, JI Karachi’s chief Hafiz Naeem-ur-Rehman while addressing a press conference at the party’s city headquarters Idara Noor-e-Haq said the people of Karachi voted for JI as the biggest party in the city.

Rehman said that JI had raised objections on the population census and led a campaign for delimitations, voter lists, and authority in the local bodies set up.

“We were stripped of many authorities in the LG Act 2013,” Rehman said.

Criticising the government over the LG polls results, the JI’s city head said that the ruling party plundered JI’s mandate while conniving with some individuals of the ECP and returning officers.

“The chief minister [Murad Ali Shah] first congratulated us on victory and then changed the results,” Rehman said, asking what should JI comprehend from it.

“This mandate would have been over 50% if there was no conspiracy or plunder,” he added.

Rehman claimed that they saw that the staff and polling material wasn’t complete.

He lauded the Election Commission for playing a “brave” role by holding the LG polls on the scheduled date, but said that electoral body’s preparation and arrangements weren’t up to the mark.

‘Karachi’s mayor will be from JI’

Rehman said that JI accepted the LG polls in order to start the process of Karachi’s development.

He claimed that the results were changed by the West deputy commissioner and Shah Faisal assistant commissioner.

He further stated that JI will stage sit-ins outside the offices of the ROs who changed the results, and the biggest protest will be at the office of the deputy returning officer where the most rigging took place.

“We have the result issued by the current presiding officer,” Rehman said while saying that the provincial government and PPP Chairman Bilawal Bhutto Zardari have been asked to fix the flawed results.

He warned of approaching the ECP and courts if the government didn’t issue the correct results.

Rehman said that JI chief, Haq has spoken to the chief election commissioner in this regard.

“Karachi’s mayor will be from JI,” he added.

Rehman concluded by saying that JI is open for talks with every party but first the counting of JI’s seats should be done properly.

“A campaign has been launched that PPP rigged polls,” Ghani lamented, urging the rivals — JI and PTI — to approach relevant forums if they have evidence in this regard.

He said that in Malir, PPP won 20 seats out of 30 while in Korangi, they won five out of 37 seats and if the district returning officer was doing anything wrong then we should have 20 seats in the district, and not five.

“JI has won more seats than we expected,” the PPP leader said whose brother also lost in Sunday elections.

Ghani said tha Hafiz Naeem was thinking to become Karachi mayor and he is now shocked after the poll results, adding that the PPP also won in Hyderabad and other Sindh cities.

He said that it is the result of PPP’s hard work in the past few years and the same was reflected in by-polls as well.

“We have no objection over vote recount and no one else should object to our request for a recount. PPP is the largest party in the city and it is our right to have our own mayor.”

He, however, ruled out any with the PTI. “PPP can approach Jamat-e-Islami for an alliance.”