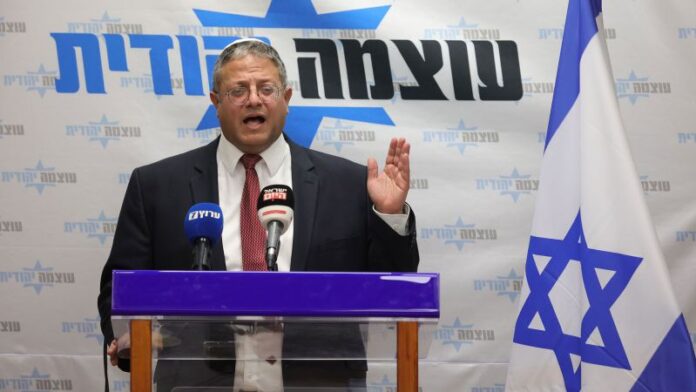 “It cannot be that lawbreakers will wave terrorist flags, incite and encourage terrorism,” he said in a statement on Sunday.

Ben Gvir issued the order after the Palestinian flag was raised in northern Israel on Thursday by Karim Younis, who had just been released from prison after serving 40 years for murdering an Israeli.

Experts say Ben Gvir’s ban is unlikely to stand up to legal scrutiny. “It’s not illegal,” to raise the Palestinian flag, Israeli lawyer Avigdor Feldman told CNN on Monday, suggesting that there was a route to getting the order overturned: “Someone has to go to court to get a statement that it’s an illegal order.”

Before the Oslo Accords, the Israeli government considered the Palestinian flag to be a symbol of terrorism, but the interim peace agreements signed between the Palestine Liberation Organization and Israel in 1993 effectively lifted the ban.

Feldman said the minister’s argument that unfurling the Palestinian flag equates to supporting terrorism is not strong.

Israel’s Police already have the power to take flags away in certain circumstances. In the past year, they have taken Palestinian flags from mourners at the funeral of Al Jazeera journalist Shireen Abu Akleh and Israeli flags from Jews on the Temple Mount, which Muslims call the Haram al-Sharif, or Noble Sanctuary.

In a statement given to CNN on Monday, a police spokesperson said: “The decision to remove a flag is based on various factors, including the nature of the flag, the circumstances under which it was hoisted, and any actions taken in conjunction with its display. These factors are considered in light of public safety and the potential for criminal offenses, such as supporting a terrorist organization.”

For Dianna Buttu, a Palestinian lawyer based in Haifa, the flag “ban” is not the point. She pointed out that the High Court ruled against such bans in November 2022, except where there is “a high probability that the raising of the flag will lead to a serious violation of public safety.”

“They do this [issue a flag ban] to give police a free hand to do whatever it is they want,” she told CNN. “They know it’s not legal to do this type of stuff – but the point is to create enough repressive measures so people stay silent.”

Alongside the flag order, Ben Gvir said he was restricting the number of lawmakers allowed to visit so-called security prisoners to one Knesset member per party.

The edicts by Ben Gvir, who heads the Jewish Power faction in Prime Minister Benjamin Netanyahu’s governing coalition, come just days after his controversial visit to the Temple Mount/Haram al-Sharif. That morning walk provoked criticism from opponents and allies alike, and a meeting of the United Nations Security Council, amid concerns about threats to the status quo of the flashpoint holy site.