Imran Khan hints at ‘political engineering’ ahead of elections 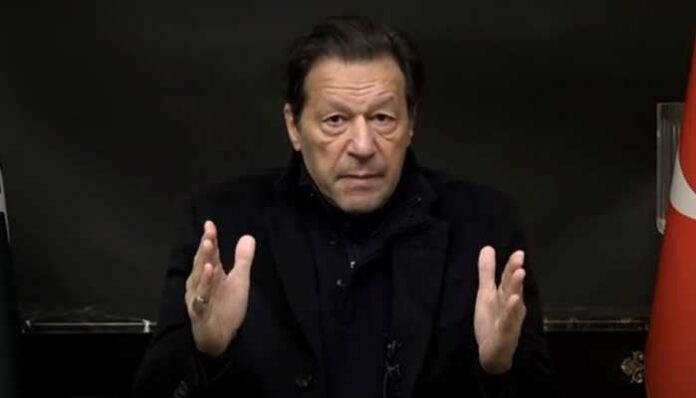 “Efforts will be made to bring [Pakistan Muslim League-Nawaz] PML-N to Punjab,” he said while addressing a PTI women’s convention in Karachi via video link from his residence in Lahore.

The deposed prime minister, who was ousted through a no-confidence motion in April 2022, spoke about fears of manipulation in the country’s politics to “weaken” his party.

“Don’t do political engineering for God’s sake. It has done so much damage to the country,” Khan said, as he warned all stakeholders that “Pakistan is slipping out of everyone’s hand”.

He alleged that people are forced to join the Pakistan Peoples Party (PPP) in Balochistan and another game is being played in Khyber Pakhtunkhwa. However, he claimed, the PTI is the only political party at the federal level that can keep the country united.

Other leaders who joined the PPP include Mir Abdullah Raheja and Mir Allah Bakhsh Rind. The leaders announced joining the party after a meeting at Bilawal House Karachi.

“I am warning all powerful circles and institutions. This is the time to manage the country. It is slipping out of everyone’s hand,” he said.

The former premier reiterated his demand for fair and transparent elections in the country, clarifying he doesn’t need “anyone’s support” in the electoral process.

“We need fair and transparent elections, not anyone’s support,” he added.

Imran Khan also lamented about the country’s economic state and called for conducting transparent elections as the foremost solution to the crises.

“Reforms are needed after transparent polls. These incompetent leaders of PDM [Pakistan Democratic Movement] cannot introduce reforms,” the PTI chief said, slamming the ineptitude of the ruling coalition in the Centre.

Seeking a “true democratic setup” to conduct elections, the former premier addressed state institutions, saying: “I tell institutions that this is the time to manage the country. We want to bring a peaceful revolution through the ballot box.”

Speaking to participants at his party’s convention in the metropolitan, Khan said the nation can’t support any political party except the PTI as the PDM and establishment have united. “Earlier, they used to say that the establishment will come and save the country.”

Censuring former chief of army staff General (retd) Qamar Javed Bajwa yet again, the ousted prime minister — whose government was sent packing following a vote of no confidence in April 2022 — said that the entire crisis is because of the ex-army chief.

Khan has been slamming the former COAS ever since he retired and handed over the military’s command to the new army chief, General Asim Munir, in November last year.

After Gen Bajwa walked out of his office, the PTI chairman blamed him for siding with the ruling coalition government in Islamabad and has levelled various allegations against him in his numerous speeches for the past couple of months.

‘We are in a crisis’

Bemoaning over the country’s economic situation, Imran Khan said his party is deliberating on how to get Pakistan out of the “quicksand”. “Only the PTI can bring the country out of the crisis, not a technocrat government.”

The PDM-led set-up’s progress, he added, is only visible in advertisements and not on the ground. Khan also blamed Finance Minister Ishaq Dar for “artificially reducing dollar rates” triggering a massive fall in the forex reserves.

A day earlier, Dar said that Pakistan’s foreign exchange reserves would “strengthen” in the coming days as he banks on friendly countries for inflows. His comment came after the State Bank of Pakistan-held foreign exchange reserves dwindled down to only $4.5 billion after the repayment of loans worth $1.2 billion to United Arab Emirates (UAE) banks.

“The imported government has arrived with the agenda to destroy the country. Every economic indicator has been slumping ever since they’ve arrived,” the ex-PM said highlighting how countries like India and Bangladesh have progressed ever since the PML-N and the PPP have taken over.

He added that Pakistan is on the same path as Sri Lanka. “We are in a crisis and it will worsen. As long as they [PML-N led govt] remain seated, the country will go down.”

The PTI chief added that investors won’t gain confidence unless the country stops begging. “The only way is to have a strong government that the business community can trust to complete five years.

“Those whom we’re begging from will demand a heavy price,” Khan said hinting at the government correspondence for loans with international financial institutions.

Also speaking at the event in person, PTI’s Secretary General Asad Umar said that the country is witnessing the worst inflation and unemployment. “Thieves are imposed on the country and it is being looted.”

The PTI politician said that the nation won’t accept decisions made in closed rooms and they will take the country’s decisions now. “No matter how much the rulers try to escape, 2023 is the year of elections.”

The former finance minister, who served in Imran Khan’s cabinet during his tenure, claimed that the PTI will form a government in Sindh and also urged participants of the convention to vote for the bat so that Karachi’s mayor could be from their party.

“In Karachi, there is no vote for anyone but Imran Khan,” he said.

The politician added the country’s biggest city stands exactly where it was 30 years ago. “Karachi, which gives 90% of the revenue [to Pakistan], is not getting rights.”