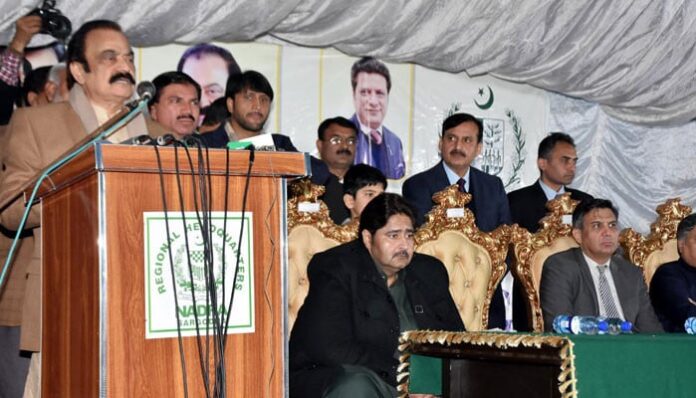 Reserves are now at their lowest level since March 2014. That is just enough to cover 25 days of imports.

On Friday, the country repaid $600 million to the Emirates NBD Bank and $420 million to the Dubai Islamic Bank. The State Bank of Pakistan confirmed this. After these loan repayments, the country’s total reserves have been reduced to $10.4 billion, with the central bank’s reserves falling to $4.56 billion, as no significant foreign inflow has been observed thus far, according to analysts. Pakistan’s total liquid foreign reserves as of December 30 were $11.4 billion, and the SBP stockpile was $5.6 billion.

The dangerously low level of reserves is flashing more red flags of default risk, as the government battles to secure financing from the International Monetary Fund.

“It’s [reserves] less than a month’s import. Pakistan’s only way out of this is to get the IMF on board as early as possible, which would pave the way for Saudi and Chinese support,” said Fahad Rauf, the head of research at Ismail Iqbal Securities.

The IMF managing director has been requested by Prime Minister Shehbaz Sharif to send a team to the country urgently to begin review negotiations for the $1.1 billion loan’s next tranche. The team may very soon visit the country, as the premier hopes. However, the IMF review mission’s dates have not yet been set.

Along with Prime Minister Shehbaz, Finance Minister Ishaq Dar will travel to Geneva to attend the Resilient Pakistan conference and meet the IMF representatives outside of another summit. The conference is scheduled for January 9.

Islamabad and the IMF differ over reviewing policy and reforms the Fund requires in Pakistan. The IMF’s programme review was supposed to be finished in November.

According to Dar, China and Saudi Arabia are expected to increase Pakistan’s foreign exchange reserves before the end of this month.

In conversation with Geo News, Ishaq Dar said Saturday that Pakistan’s foreign exchange reserves would “strengthen” in the coming days as he banks on friendly countries for inflows.

“Without a doubt, the situation [forex reserves] is quite alarming, and the country needs an immediate injection of dollars,” said Dr. Ashfaque Hasan Khan, a former adviser to the finance ministry and a renowned economist. “We are knocking on the default’s door,” he added.

He said import restrictions are necessary to preserve the scarce foreign exchange reserves, but neither the general public nor businesses know the seriousness of the balance of payments issue. If the central bank limits the opening of letters of credit, it is likely to do so to prevent unnecessary imports. “We have to decide between slowing down the economy and closing down industries or defaulting on foreign loan repayments,” Khan said.

Growing political polarisation and instability have had an impact on economic fundamentals. The government has a large cabinet of between 70 and 80 members, and it is not cutting back on spending, he said.

Khan opined that the political cost of reviving the IMF programme and fulfilling the requirements to finish the ninth and tenth reviews of the IMF bailout programme must be borne by the government, which is still unwilling to do so.

Pakistan’s external debt servicing obligation for this fiscal year is $23 billion, of which $6 billion has been repaid and $4 billion rolled over, leaving $13 billion yet to be funded. There is a further repayment obligation of $75 billion during FY2024–2026, according to the Pakistan Business Council (PBC).

Despite a severe import crunch leading to significant unemployment, the current account deficit is running at about $8 billion, and there is a substantial backlog of dividends and other remittances.

“While the IMF programme is critical to restoring friendly nations’ confidence in assisting, it will not suffice to meet debt obligations unless they are not significantly restructured, nor will it provide the space to implement fundamental reforms. Short-term rollovers will not suffice,” it said.

Meanwhile, Prime Minister Shehbaz Sharif on Saturday said that he had told the International Monetary Fund (IMF) managing director about the government’s resolve to complete the terms of the Fund’s programme.

On his Twitter handle, the prime minister said that he had held a telephonic conversation with the IMF MD. “…also explained Pakistan’s economic difficulties especially after the devastating floods. IMF delegation will come to Pakistan soon,” he added in a tweet.

Also, Interior Minister Rana Sanaullah said that the PTI commitments to the International Monetary Fund (IMF) had sandwiched Pakistan between the devil and the deep blue sea.

He said the government was trying its best to control the situation perpetrated due to the harsh conditions of the IMF.

Addressing the inaugural ceremony of a new NADRA centre near Painsara on Jhang Road on Saturday evening, he said that the PTI government first inked documents with the IMF and then backed out of its commitments, which landed Pakistan in a very alarming situation.

“If the present government tries to fulfil the harsh conditions of IMF, it jacks up inflation and price spiral, coupled with the economic setback. If we back out from these conditionalities, our economic survival will become next to impossible, and even our friendly countries cannot extend financial help to us,” he said.

The minister said that some elements were intentionally creating uncertainty for their ulterior political motives. Their propaganda was practically a double-edged sword, as they wanted to create problems for the sitting government and push Pakistan towards bankruptcy. “However, Prime Minister Shehbaz Sharif, along with his economic team, is making sincere efforts to overcome this situation, and hopefully the people will hear good news shortly,” he added.

He claimed that during Nawaz Sharif’s tenure, the growth rate reached 6.2 percent. The dollar was stable at Rs105. Similarly, the prices of electricity and gas were stable and affordable for ordinary people. He said that at the time, global economic analysts were optimistic that Pakistan was progressing satisfactorily, but an incompetent individual imposed on the country reversed the PMLN government’s economic gains.

The minister said that the only objective of this incompetent person was to malign the opposition, and he was fully involved in political engineering. During his tenure, false and unfounded cases were instituted against his political opponents, but not even a single case was proved in a court of law.

Without naming Imran Khan, he called him a liar and stated: “He was blaming me for murdering 20 people.” Imran was enjoying full powers in the federal and provincial governments. He was in a position to prove him (Rana) guilty of these allegations, but he used it just as a tool of political maligning, and hence he was forced to get yet another false heroin case registered against him.

“This person is hoodwinking the masses, especially the youth. He is promoting a culture of abusive language, hate and obscenity. The people must reject him through their votes because the country will suffer if he usurps power again through illegal means,” the minister added.

The interior minister held Khan responsible for the recent inflation in the country as the former prime minister had shattered the agreement signed with the International Monetary Fund (IMF).

“The IMF is not interested in who the prime minister is,” Sanaullah said, adding that the international lending body asked them first to fulfil all the conditions agreed upon by the previous government and only then would it would help the country. He held the former prime minister responsible for all the problems being faced by the country.

Sanaullah said that the Wazirabad attack was a personal deed of a person who was apprehended then and there, and he also confessed to the crime, but the PTI was making false propaganda of three attackers only to keep this case alive for political maneuvering.

Earlier, the minister unveiled the plaque and cut the ribbon to formally inaugurate a NADRA center at Painsara.

Mehtab Haider adds: Amid the rapidly depleting foreign exchange reserves held by the State Bank of Pakistan (SBP) that have nosedived to $4.5 billion, Islamabad is anxiously waiting for dollar inflows from the Kingdom of Saudi Arabia and China as a breathing space to avert the eruption of a full-fledged crisis.

Although, Prime Minister Shehbaz Sharif had hinted that the IMF mission would visit Pakistan within two to three days, Ministry of Finance high-ups have stated that no date was yet finalised. But Minister for Finance Ishaq Dar would hold a meeting with the IMF mission chief in Geneva on January 9 on the sidelines of the Donors Conference where both sides could finalise the schedule for holding next round of talks in Pakistan.

“For a breathing space, Pakistan is anxiously waiting for additional deposits of $3 billion from the KSA and $700 million refinancing from China as commercial loans before getting the next tranche of $1 billion from the IMF,” top official sources said while talking to The News here on Saturday.

Pakistan would have to repay another $300 million loan to China next week, so the foreign exchange would further deplete and could touch $4.2 billion.

Now after the recent visit of the chief of the army staff to the KSA, Pakistani authorities are expecting that the KSA would provide additional deposits of $3 billion soon for rescuing Islamabad from the eruption of a full-fledged balance of payment crisis.

Although, the friendly countries attached their financial support to the revival of the IMF programme, Pakistani officials made their last ditch effort to convince the KSA to provide the much-needed assistance to avert the crisis.

When contacted, one top official said it was in the larger interest of Pakistan to accomplish the pending 9th Review under the Extended Fund Facility (EFF) as a standalone instead of clubbing the 9th and 10th reviews because if both the reviews were clubbed, it might take more time for the revival of the IMF programme that Pakistan could not afford at the moment.

The official data for all sectors was not still available for end-December 2022, which would be available till the third week of February 2023, so the pending 9th Review under the EFF should be accomplished and then the 10th Review should be held.

Even with the revival of the IMF programme, there is realisation among the policymakers that Pakistan is left with no other option but to undertake much-needed structural reforms on short, medium and long term basis to generate non-debt creating dollar inflows.

With approach of status quo and perpetual elite capture, the dream of bringing desired changes will not materialise. For boosting non-debt creating inflows, the country will have to focus on boosting Pakistani exports and luring remittances from Pakistanis living abroad. For boosting up dwindling exports, the government will have to do spadework for the provision of energy at affordable rates for producing exportable surplus at competitive rates, otherwise the dream of increasing exports will not bear fruit.

For increasing the remittances, the existing three exchange rates will have to be abolished as the existing mechanism is proving to be an incentive to send dollars to Pakistan through non-official channels because of higher rates.