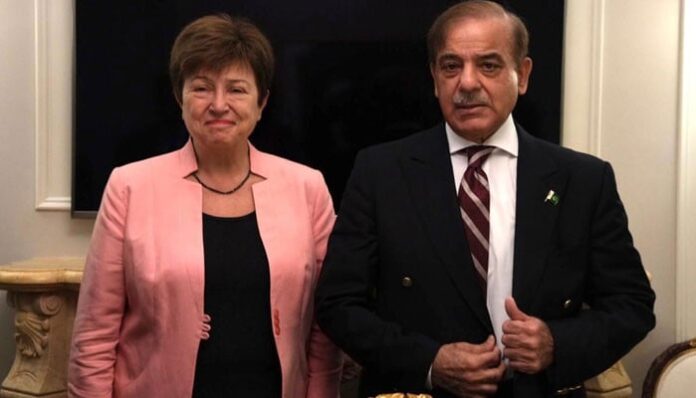 According to a statement issued by the Prime Minister’s Office, PM Shehbaz extended an invitation to the IMF chief to participate in the conference in Geneva, Georgieva thanked for the invitation but explained that as the IMF board meetings had been prefixed for January 9-10, “she will only be able to join the conference virtually”.

“Georgieva called PM Shehbaz over the telephone and expressed her deep sympathy and concern on the human and material losses due to the recent floods and reiterated her commitment to helping Pakistan in this difficult period,” the statement added.

The premier thanked the managing director for her concern about the fallout of the floods and assured her that Pakistan is “committed to successfully completing the ongoing IMF programme”.

Earlier today, PM Shehbaz said an IMF delegation was slated to visit Pakistan in two-three days to “take up and finalise” the ninth review of the economy to unstick a direly needed bailout tranche of $1.1 billion.

“I spoke to Georgieva and emphasised that Pakistan wishes to complete the IMF bailout programme,” the premier said during an address at the inauguration ceremony of Hazara Electric Supply Company (HAZECO).

“I urged her to soften the terms of the deal because the masses cannot be burdened anymore. We have slapped taxes on the rich segments of society,” the premier said.

“I also pleaded with her to dispatch a delegation for the 9th review under the loan programme and she replied that IMF officials are scheduled to visit Pakistan in over a couple of days [2-3] days.”

The development comes as Pakistan strives to allay fears that the country is inching towards a default, as a stalemate over the ninth review of the IMF bailout programme continues owing to differences between the two sides.

This impasse has resulted in the holdup of a $1.1 billion tranche, which could have been released somewhere in November.

The Ministry of Finance, in a statement issued in this regard, said that Dar apprised the AIIB president of damages caused by the rain-induced floods in Pakistan and its impact on the economy.

“The finance minister highlighted the economic outlook of the country and said that the present government inherited a weak economic legacy but is focusing on fixing things in the right direction and is introducing reforms in all sectors to achieve economic growth and development,” the statement read.

Dar claimed that due to pragmatic measures taken by the government, “the country is destined for progress and development.”

The finance czar extended felicitations to Liqun for assuming a second term as the bank’s president and hoped that the bank will continue to progress in future under his able leadership.

The ministry mentioned that during the meeting the AIIB head appreciated the economic policies and reforms of the present government for the social uplift of the masses.