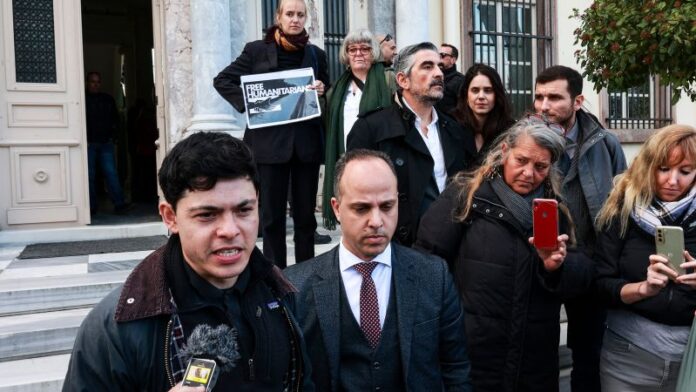 A Greek court dropped espionage charges against a group of aid workers who rescued migrants from the sea, in a move hailed by rights groups and lawmakers.

Irish-German citizen Sean Binder and 23 other humanitarian workers had their misdemeanor charges set aside by a court on the island of Lesbos Friday, however felony charges against the group remain pending.

The court in the island’s capital Mytilene called a halt to the prosecution of the some of the misdemeanor charges due to “procedural irregularities” in the investigation, Binder’s lawyer, Zacharias Kessas, said outside the court.

“They recognized that there are certain procedural irregularities that made it impossible for the court to proceed on the core of the accusation, so concerning the misdemeanors, somebody can say that the accusations are dropped,” Kessas said.

“But we cannot feel happy about this because really they just realized what we were shouting for the last four years, so there are still many things to be done in order to reach the final step which is the felonies that are still ongoing, and the investigation is still in process.”

A statement from Amnesty International Friday said the Lesbos court “sent the indictment back to the prosecutor due to procedural shortcomings, including a failure to translate the indictment.”

Binder and Syrian refugee Sarah Mardini were arrested in 2018 after participating in several search and rescue operations with non-profit organization Emergency Response Center International near Lesbos, an island in the Aegean Sea.

The group had faced four charges classified by Greek judicial authorities as “misdemeanors”: espionage, disclosure of state secrets, unlawful use of radio frequencies and forgery, according to a UN Human Rights Office statement.

The court’s move was welcome by rights group and politicians.

Lawmakers from the European Union said it was “a step toward justice.”

The spokesperson for the UN High Commissioner for Human Rights, Liz Throssell, welcomed the court’s recommendation to drop some of the charges but reiterated the UN’s call “for all charges against all defendants to be dropped.”

Binder’s elected representative, MEP Grace O’Sullivan, said the prosecution “essentially was full of holes” in a video posted to Twitter.

“Good news from Greece. We’ve just heard that Sean Binder and the other search and rescue humanitarian workers have had their charges dropped,” she said.

While the misdemeanor charges were dropped on Friday, an investigation into felony charges against the humanitarian workers remains pending, Amnesty International said in a statement.

The aid workers stand accused of assisting smuggling networks, being members of a criminal organization, and money laundering – charges that could result in up to 25 years in prison if they are found guilty, according to a European Parliament report published in June 2021.

Referring to the felony charges that remain pending, O’Sullivan said while they didn’t know how long that would take, “today is actually a step in the right direction. A step towards justice.”

“All we want is justice. We want this to go to trial and it doesn’t seem like this will happen anytime soon given what happened today,” Binder said outside the courthouse.

“At the same time, we have been so lucky to have so much support internationally, everywhere, and I think that has forced the prosecution of this court to at least recognize the mistakes made and at least to some extent there has been less injustice.”