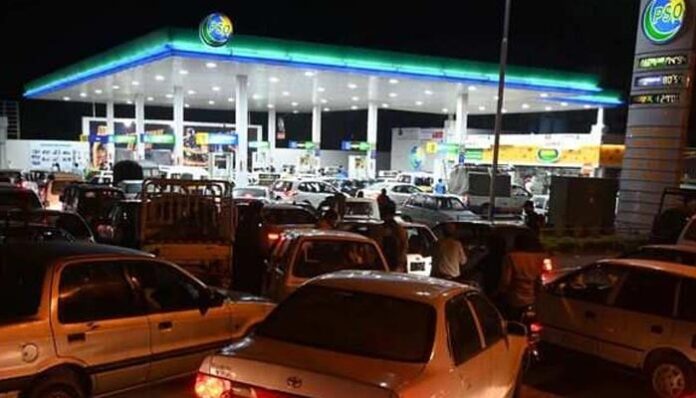 Responding to the rising panic in the oil industry and amongst consumers, the federal government Friday ruled out any possibility of a fuel crisis in Pakistan, stating that the oil reserves required by the country were well in stock.

The ministry of petroleum, in a statement, strongly denied the fears of petroleum shortage in the country. The statement termed the claims of oil shortage that had been circulating on social media as “rumours”.

The ministry made it clear that it had the required oil reserves already in stock and that there is “no possibility of shortage”.

“The Pakistan State Oil (PSO) and other oil shipping companies have adequate stocks of petrol, diesel, kerosene and other types of petroleum products,” the statement said, adding, “The quantity of diesel available for storage in the country is at full capacity so people should not listen to rumours, speculations and misleading information”.

In a separate statement on Twitter, the PSO too stressed that it had ample stocks available in the supply chain as per the Oil and Gas Regulatory Authority’s (OGRA) specified day saying: “As the national flag bearer, the PSO remains committed to fuelling the nation and is ensuring an uninterrupted supply of fuel at its retail outlets nationwide.”

In their official communique, both PSO and the ministry of petroleum requested that the “rumours” of the shortage of petrol not be circulated or shared by the media.

According to the PSO, the ministry and OGRA are monitoring the status of reserves of private companies so that the “country’s supply chain continues to be maintained seamlessly”.

Fears regarding the supply of petroleum began to sprout in the oil industry after banks refused to settle letters of credit (LCs) for the import of crude and petroleum products.

The chain of petroleum products would take six to eight weeks to normalise in the country if it was compromised on the basis of the refusal of banks to settle LCs for the import of crude and petroleum products, the oil industry feared.

These fears were expressed by the Oil Companies Advisory Council (OCAC) — the representative body of refineries and oil marketing companies (OMCs) — to the Ministry of Finance.

The OCAC sought the ministry’s intervention in the matter after its members started facing issues in the settlement of LCs. This occurred despite the fact that oil imports have been put on the list of essential items for opening and settlement of credit letters.

OGRA on January 15 issued a clarification regarding the matter.

He added, “Sufficient stocks of petrol and diesel are available across the country. OGRA strongly rebuts the speculations on petrol/diesel shortages. Useable stocks in the country are good enough for 17 days of petrol and 32 days of diesel.”

However, speculations and fears regarding the shortage continued to circulate over the week as Pakistan’s central bank forex reserves plunged to the lowest level since February 2014 after a decline of 22.11%, posing a serious challenge for the country in financing imports.

This shortage of crucial dollars has left banks refusing to issue new letters of credit for importers, hitting an economy already squeezed by soaring inflation and lacklustre growth, ultimately contributing to the fears of oil shortage in the country.