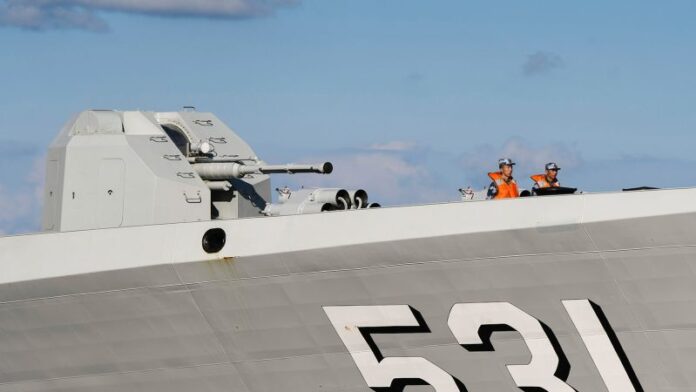 As China continues to grow what is already the world’s largest navy, a professor at the US Naval War College has a warning for American military planners: In naval warfare, the bigger fleet almost always wins.

Pentagon leaders have identified China as the US military’s “pacing threat.” But fleet size numbers show that the US military can’t keep pace with China’s naval growth.

The People’s Liberation Army Navy (PLAN) surpassed the US Navy in fleet size sometime around 2020 and now has around 340 warships, according to the Pentagon’s 2022 China Military Power Report, released in November. China’s fleet is expected to grow to 400 ships in the next two years, the report says.

Meanwhile, the US fleet sits under 300 ships, and the Pentagon’s goal is to have 350 manned ships, still well behind China, by 2045, according to the US Navy’s Navigation Plan 2022 released last summer.

So to compete, US military leaders are counting on technology.

That same document says, “the world is entering a new age of warfare, one in which the integration of technology, concepts, partners, and systems — more than fleet size alone — will determine victory in conflict.”

Not so fast, says Sam Tangredi, the Leidos Chair of Future Warfare Studies at the US Naval War College.

If history is any lesson, China’s numerical advantage is likely to lead to defeat for the US Navy in any war with China, according to Tangredi’s research, presented in the January issue of the US Naval Institute’s Proceedings magazine.

Tangredi, a former US Navy captain, looked at 28 naval wars, from the Greco-Persian Wars of 500 BC, through recent Cold War proxy conflicts and interventions. He found in only three instances did superior technology defeat bigger numbers.

“All other wars were won by superior numbers or, when between equal forces, superior strategy, or admiralship,” Tangredi wrote. “Often all three qualities act together, because operating a large fleet generally facilitates more extensive training and is often an indicator that leaders are concerned with strategic requirements,” Tangredi wrote.

The three outliers – wars from the 11th, 16th and 19th centuries – aren’t likely familiar to all but the most ardent of scholars, but others that show where numbers beat technology certainly are.

Take the Napoleanic wars of the early 1800s, for example.

“French warships were superior in the technology of ship design and construction, but ultimately, it was the large numbers of Royal Navy ships that prevented Napoleon from crossing the (English) channel,” Tangredi wrote.

Or World War II in the Pacific, where Japanese technology began as the better of America’s.

“Imperial Japan entered the war with some superior technologies: the Zero fighter, Long-Lance torpedo, and aerial torpedoes that could strike in shallow water,” Tangredi wrote.

“However, it was the overall might of US industry and the size of the US fleet (particularly its logistics and amphibious ships) that ground out victory over the Imperial Japanese Navy,” he said.

“His research is a very good way to push back on the silly assumption that mass doesn’t matter in war at sea,” Patalano said.

A larger size means more leaders looking to gain the edge in their commands.

And he said a large industrial base is essential, especially in being able to build new units after incurring casualties in battle.

“In naval war, attrition is a real thing, so the ability to replace is vital,” Patalano said.

Tangredi’s look at the World War II aircraft carrier fleets shows the stark numbers. Both the US and Japan began the war with eight carriers, he said.

Shipbuilding was a US strength when it was the world’s industrial giant in the 1940s. That title now falls to China.

“Most analysts doubt that the US defense industry — which has consolidated and shrunk since the end of the Cold War — could expand quickly enough to meet wartime demand,” Tangredi wrote.

Indeed, there is worry US industry cannot keep up with the demand of providing weapons assistance to Ukraine to fight Russia’s invasion while keeping US weapons arms inventories at adequate levels.

Adm. Daryl Caudle, commander of US Fleet Forces Command, last week called on the nation’s defense industries to step up their game, saying “you’re not delivering the ordnance we need.”

“It’s so essential to winning. And I can’t do that without the ordnance,” Caudle said at a symposium in Washington, adding that the US is “going against a competitor here, and a potential adversary, that is like nothing we’ve ever seen.”

“The United States Navy is going to is not going to be able to match the PLAN missile for missile,” Gilday said.

And if the US Navy can’t match China’s missile for missile, or ship for ship, Tangredi wonders where it can find an edge.

“US leaders must ask themselves to what extent they are willing to bet on technological — without numerical — superiority in that fight,” he wrote.

“I do not say that a smaller, technologically superior fleet could never defeat a much larger fleet, I only say that — with the possible the exception of three cases in the past 1,200 years — none has.”