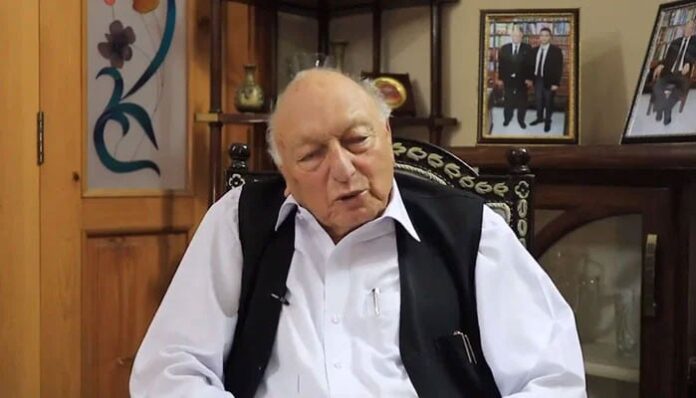 The senior lawyer was moved to the Lady Reading Hospital after the shooting but was pronounced dead upon arrival/ The medical facility’s administration said that six bullets were fired at Latif.

According to the police, the assailant, identified as Adnan Afridi, was in their custody.

Speaking to the media, SSP Operations Kashif Abbasi said that attacker Adnan Afridi s/o Abdul Sami Afridi has been taken into custody from the crime scene.

The police are investigating how did the gunman manage to get inside the high court premises despite the security.

The SSP said that it seems a matter of personal enmity between the two families while further investigations are underway.

Abbasi said the killing seemed to be an upshot of a blood feud between the two families; however, further investigation was underway.

When asked about the security arrangements in the high court, the police official said they were looking into it and action would be taken if any lapse was found.

It may be noted that Latif was acquitted in a murder case of Swat Anti-Terrorism Court (ATC) Judge Aftab Afridi and his three family members a few weeks ago.

He was booked along with nine others in the case of the judge’s assassination.

As per details, Aftab Afridi, his wife, a one-and-half-year grandson and daughter-in-law were enroute to Islamabad from Peshawar via Swabi when unidentified assailants attacked his car near the Ambar Interchange in April, 2021.

However, Latif, the then-SCBA president, had denied his involvement in the incident and said that he and his son had been falsely implicated in the case. He had also assured the authorities of fully cooperating with the relevant agencies.

The judge’s family, however, in a press conference rejected the verdict and requested the high court for justice, saying they have evidence of the lawyer’s involvement in the murder.

Meanwhile, Prime Minister Shehbaz Sharif, in his condolence message, expressed deep sorrow and grief over the jurist’s murder in Peshawar.

“The worsening law and order situation in Khyber Pakhtunkhwa is alarming, the provincial government should immediately take steps to improve it.”

National Assembly speaker and deputy speaker also condemned the murder of the lawyer.

The custodians of the National Assembly lauded the services of the lawyer in politics and legal community.

Sindh Bar Council condemned murdered and announced a boycott of the court proceedings across the province.