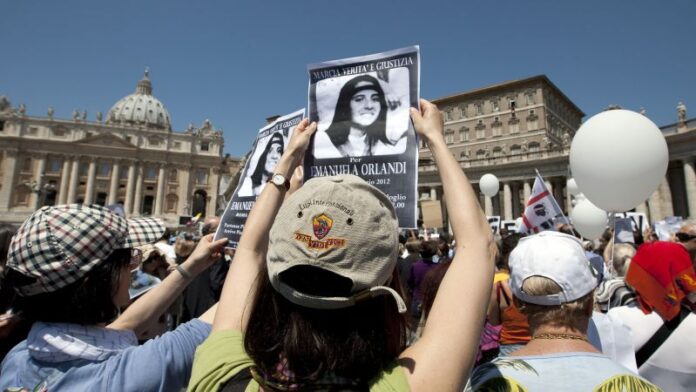 The Vatican has opened a new investigation into the disappearance of a 15-year-old daughter of one of its employees in 1983.

The case of Emanuela Orlandi has come under intense scrutiny in recent months following the release of an investigative docuseries from Netflix titled “Vatican Girl.”

Orlandi, who was the daughter of a prominent Vatican employee and lived within the walls of the holy city, disappeared in the summer of 1983 while on her way home from a music lesson in central Rome.

On Monday, the Vatican confirmed in a statement that Alessandro Diddi, the Vatican promoter of justice, will open a new investigation into the case.

Holy See press office director Matteo Bruni said that the opening of the case was “also in response to several requests made by the family.”

Orlandi disappeared on June 22, 1983 after a lesson at a music school adjacent to the Sant’Apollinare Opus Dei Catholic Church near Piazza Navona in Rome.

Her father, Ercole Orlandi, who died in 2004, worked for the Institute for the Works of Religion in the Holy See. Her mother, Maria Orlandi, still lives in the family apartment inside Vatican City. Her brother, Pietro Orlandi, has spent his life trying to uncover what happened to his sister and has often blamed the Vatican for hiding information.

Released last year, the four-part Netflix series by Mark Lewis highlighted several of the most prominent conspiracy theories, including that her kidnapping was connected to Mehmet Ali Agca, who was at the time in prison for an assassination attempt on John Paul II in St. Peter’s Square in 1981.

Orlandi’s disappearance has also been linked to the Band of Magliana criminal gang, whose leader Enrico de Pedis was buried inside the Sant’Apollinare church until the Vatican exhumed his bones in 2012 at the request of the girl’s family, who thought she might be buried with him. Then in 2012, the Vatican’s chief exorcist Gabriele Amorth claimed Orlandi was kidnapped by Vatican police as part of a sex ring.

Human remains were found in 2018 at the Holy See embassy to Italy in central Rome and were unsuccessfully tested for a DNA match to the missing girl.

A year later, the Vatican agreed to exhume the tomb of two princesses thought to be buried in the cemetery of the Pontifical Teutonic College inside the Vatican City. The princess’ remains were not found in the tomb, nor were Orlandi’s, but two ossuaries were found under a secret door in the cemetery.

Lewis interviewed Orlandi’s mother and sisters, who had never been interviewed before, as well as the chief investigator with the Italian police at the time. He used the old missing persons poster design with Orlandi’s photo as the primary advertisement for the series, which brought new attention to the case.