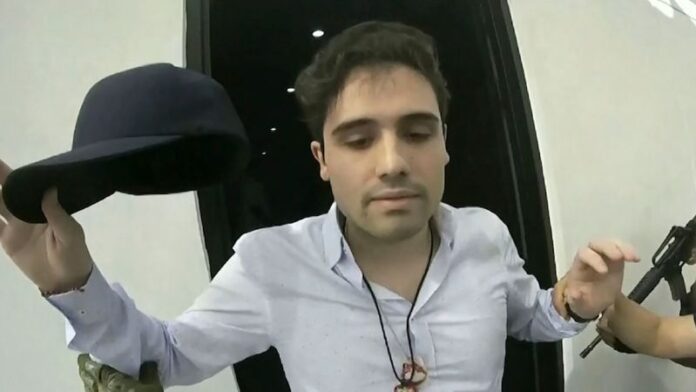 Mexican authorities have arrested Ovidio Guzmán, son of notorious drug lord Joaquin “El Chapo” Guzmán, a source from the federal government of Mexico told CNN, in a dramatic operation in the northern state of Sinaloa on Thursday that led to clashes around the city of Culiacán.

Guzmán is described as “a high-ranking member of the Sinaloa Cartel” in a press release issued by the United States State Department on December 16, prior to his arrest.

He was previously arrested by federal authorities in October 2019, but was released on the orders of President Andrés Manuel López Obrador to avoid further bloodshed.

Guzmán’s arrest on Thursday led to clashes in various parts of Culiacán, according to local officials who told citizens to shelter at home.

Social media videos appear to show trucks on fire and intense shooting near the airport, which was closed for most of the day due to the violence. CNN has not yet verified these videos.

In a morning address on Thursday, President López Obrador said the operation in Culiacán had been underway since dawn.

As the arrest unfolded, Sinaloa Secretary of Public Security Cristóbal Castañeda said that vehicles were being looted and blockades “are taking place in different parts of the city” as he asked the public not to leave the city.

The state’s education secretary also announced that school and administrative activities had been suspended in Culiacán and urged those who are in a risk area to take refuge in a safe place.

The state of Sinaloa is home to the Sinaloa Cartel, one of the world’s most powerful narcotics trafficking organizations. “El Chapo” was the leader of the cartel before he was sentenced to life in prison in 2020.

The State Department, which was offering a $5 million reward for information leading to Guzman’s arrest, wrote that law enforcement investigations indicated that Guzmán and his brother, Joaquín Guzmán-López, “inherited a great deal of the narcotics proceeds” following the death of another brother, Edgar Guzmán-López.

They “began investing large amounts of the cash into the purchasing of marijuana in Mexico and cocaine in Colombia. They also began purchasing large amounts of ephedrine from Argentina and arranged for the smuggling of the product into Mexico as they began to experiment with methamphetamine production,” the State Department said.

The brothers are also alleged to oversee an estimated 11 “methamphetamine labs in the state of Sinaloa,” the State Department says.

Their father “El Chapo” Guzmán was convicted in the US in 2019 of 10 counts, including engaging in a continuing criminal enterprise, drug trafficking and firearms charges. He was sentenced to life in prison plus 30 years and ordered to pay $12.6 billion in forfeiture.

This is a developing story. More details to follow.