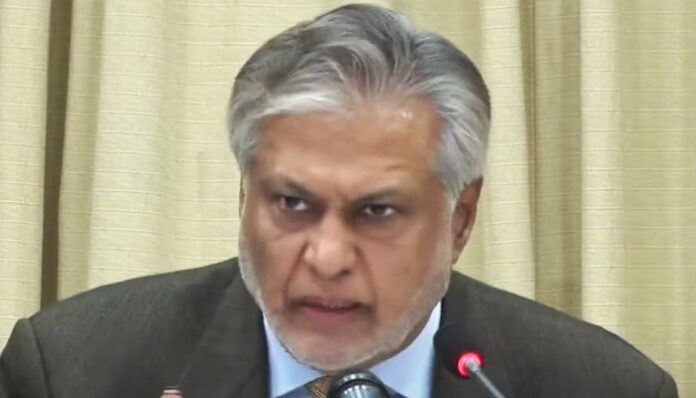 ‘Categorically’ denying the rumours, the finance minister clarified that there is no such move under consideration.

Taking to his Twitter, the finance minister wrote: “National foreign exchange reserves always include forex held with [the State Bank of Pakistan] SBP and commercial banks.

He noted that recently, he quoted the forex reserves figure based on this principle.

Dar’s statement comes days after he had said Pakistan’s foreign exchange reserves stand at $10 billion and not $4 billion, as $6 billion held by commercial banks also belong to the country.

The comment triggered mass hysteria among the depositors who felt that there could be a repeat of 1999 when the government confiscated dollars held by private banks.

The finance minister, without naming the Pakistan Tehreek-e-Insaf (PTI), accused the party of ruining the country’s economy in the past, adding that some “vested elements” gave his comments a deliberate twist and started a campaign as if the government was considering access to foreign exchange held with commercial banks.

Dar maintained that the foreign exchange held by commercial banks is “indeed the property of the citizens”.

“Therefore said misconstrued, misinterpreted and mala fide, propaganda should be ignored,” he said, reiterating that Pakistan was moving towards improvement in its forex reserves position in the near future.

Pakistan will have to repay approximately $8.3 billion in the shape of external debt servicing over the next three months (Jan-March) of the current fiscal year.

The government is eyeing to pass the ninth review of the International Monetary Fund (IMF) to secure a $1.7 billion bailout package, but both sides have made no substantial headway in recent days.

‘Everything is all worked out’

The finance minister also addressed the issue in a press conference alongside Prime Minister Shehbaz Sharif and other federal cabinet members, Dar elaborated that prior to 1999, every cent that came into the country was deposited with the central bank and private banks were not allowed to keep dollars.

“In February 1999, when I was the finance minister, we devised a system whereby a significant amount [of dollars] remain with [private] banks. It was on June 30, 1999 that reserves were broken down into three columns — those with the SBP, commercial banks and total.

“Whenever Pakistan’s reserves are quoted anywhere in the world — a survey or a document — the [total figure] is quoted and then a breakdown is given. I gave a breakdown too,” he added.

The minister said: “Some people had worsened the country’s situation to the extent that it had slipped from being the 24th largest economy in 2016 to the 47th.”

“Even now, they cannot tolerate any good development. They gave such a twist [to my remarks],” he said, adding that while the federal cabinet was busy working for Pakistan under PM Shehbaz’s guidance, such people were spreading rumours that the government would take dollars from commercial banks.

“Nothing of that sort will happen. Everything is all worked out […] and in order. Nothing to worry about,” he assured, urging those “spreading the rumours” to play a positive national role.