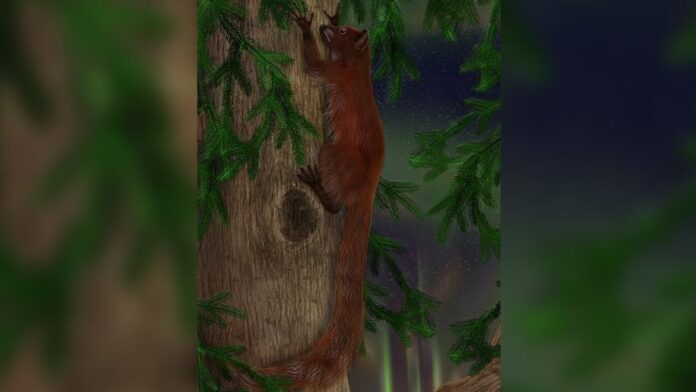 Analysis of fossils found in the far north of Canada has revealed that two previously unknown species of ancient near-primates lived above the Arctic Circle some 52 million years ago, according to new research.

The now-extinct creatures belonged to a part of the primate family tree that branched off before the ancestors of lemurs diverged from the common ancestors of monkeys, apes and humans, said study coauthor Dr. Chris Beard, a distinguished foundation professor of ecology and evolutionary biology at the University of Kansas and senior curator at the university’s Biodiversity Institute and Natural History Museum.

The two sister species lived on what is now Ellesmere Island in northern Canada. They are the first known primatomorphans, or primate relatives, to have lived in latitudes north of the Arctic Circle, according to a study published Wednesday in the journal PLOS ONE.

“To get an idea of what Ignacius looked like, imagine a cross between a lemur and a squirrel that was about half the size of a domestic cat,” Beard said. “Unlike living primates, Ignacius had eyes on the sides of its head (instead of facing forward like ours) and it had claws on its fingers and toes instead of nails.”

When researchers analyzed the fossil fragments, the jawbones and teeth of Ignacius seemed different from other primatomorphans that lived in North America’s more southerly reaches.

“What I’ve been doing the past couple of years is trying to understand what they were eating, and if they were eating different materials than their middle-latitude counterparts,” said lead study author Kristen Miller, a doctoral student at the University of Kansas’ Biodiversity Institute and Natural History Museum.

The Arctic primatomorphans evolved special features in their jaws and teeth to chomp on harder foods, like nuts and seeds, as opposed to their preferred diet of ripe fruit. This physical adaptation was likely because for half of the year, the species lived in the darkness of Arctic winter, when food was much more difficult to find.

“That, we think, is probably the biggest physical challenge of the ancient environment for these animals,” Beard said.

These findings could also be used to understand how animals adapt and evolve amid periods of climate change — as with species facing the human-driven climate crisis today.

Researchers believe the primatomorphans descended from an ancestor species that trekked north from the more southerly regions of North America. Similar fossils have been found across Wyoming, Texas, Montana and Colorado, according to Miller.

“No primate relative has ever been found at such extreme latitudes,” Miller said. “They’re more usually found around the equator in tropical regions. I was able to do a phylogenetic analysis, which helped me understand how the fossils from Ellesmere Island are related to species found in midlatitudes of North America.”

The common ancestor of the two Ignacius species likely reached Ellesmere Island around 51 million years ago, Beard said. At the time, it was a peninsula jutting into the Arctic Sea from adjacent parts of North America.

Ignacius mckennai and Ignacius dawsonae are named in part after two of Beard’s former colleagues and mentors, he explained: the late paleontologists Dr. Mary Dawson of the Carnegie Museum of Natural History in Pittsburgh and Dr. Malcolm McKenna of the American Museum of Natural History in New York, both of whom worked extensively on Ellesmere Island.

During these ancient times, the Arctic Circle was a warmer, more hospitable place for life. Global warming had caused the region to be much warmer and wetter, with a swamplike environment. The warmer temperatures during this period likely encouraged Igancius’ ancestor to venture north.

“Winter temperatures may have gotten as low as freezing for short periods of time, but we know that there were hardly ever any sustained freezing temperatures because crocodilians have been found on Ellesmere Island, and they cannot survive long freezes,” Beard said. “In the summertime, temperatures reached about 70 degrees Fahrenheit.”

Despite the warmer temperatures, the primatomorphans still had to adapt to survive in their unique northern ecosystem. They grew bigger than their southern relatives, who resembled squirrels; such growth commonly happens in mammals living in northern latitudes because it helps them maintain the needed core body temperature, Beard said.

“(The findings) tells us to expect dramatic and dynamic changes to the Arctic ecosystem as it transforms in the face of continued warming,” Beard said. “Some animals that don’t currently live in the Arctic will colonize that region, and some of them will adapt to their new environment in ways that parallel Ignacius. Likewise, we can expect some of the new colonists to diversify in the Arctic, just as Ignacius did.”