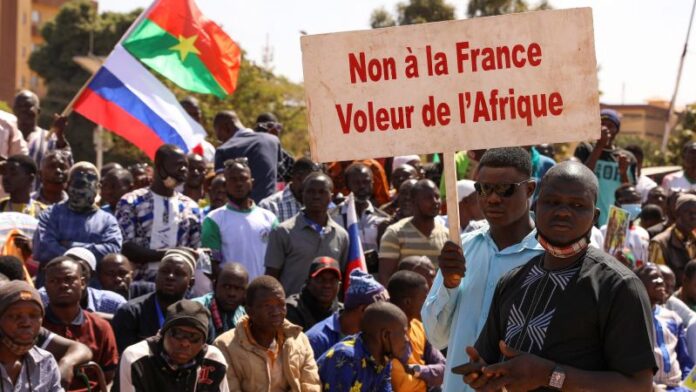 The military government of Burkina Faso has demanded the departure of French troops from the country, according to the government press agency Agence d’Information du Burkina (AIB).

France has exactly one month to remove its troops from Burkina Faso, according to the terms of the 2018 agreement, AIB reported, citing sources.

The military government “denounced last Wednesday, the agreement which has governed since 2018, the presence of the French Armed Forces on its territory,” AIB reported Saturday.

France still has 400 special forces based in Burkina Faso, according to Reuters, to help fight Islamist militants linked to al Qaeda and the Islamic State after years of violence in the region.

On Friday, residents in the capital Ouagadougou took to the streets to protest the presence of French troops in the country.

Video from the protest showed protesters carrying signs with the slogans “French army get out our house” and “Friendship Burkina Russia.”

Some protesters carried the national flags of Burkina Faso and Russia.

The mission was succeeded in August 2014 by Operation Barkhane, a broader French anti-terror initiative targeting Islamists across the Sahel, including in Burkina Faso.

French President Emmanuel Macron announced in June 2021 that the mission would be replaced by a more international effort, and Western troops began withdrawing from Mali in February last year though they remain in Burkina Faso.

The military suspended the constitution and closed borders. Lieutenant-Colonel Paul-Henri Damiba was installed as the West African country’s new leader.

Damiba’s time in power proved short-lived, however, as he was ousted from the country’s top position during a coup d’état in October 2022. Army Captain Ibrahim Traoré was subsequently appointed as the country’s new president.