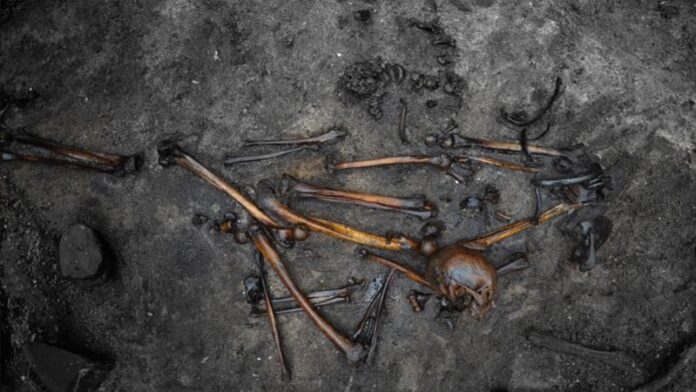 In 1984, a peat cutter discovered human remains in a bog in Cheshire, England. They belonged to a man who died a brutal death some 2,100 years ago before being placed in the bog — examination of his well-preserved mummy revealed blows to the head, a possible stab wound and a broken neck. Twisted sinew found still wrapped around his neck may have also been a garotte.

Now in the British Museum in London, the remains of the Lindow Man are perhaps the best known of Europe’s 2,000 or so “bog bodies.” These are mummies and skeletons that have been found mired in the peat and wetlands of Ireland, the United Kingdom, the Netherlands, Germany, Scandinavia, Poland and other parts of Eastern Europe.

The bodies — often exquisitely preserved by the bogs’ cool, acidic conditions and organic compounds— provide an exciting snap shot of the past. Archaeologists study their skin, bones, clothes, belongings and sometimes even their last meal. Now, researchers have undertaken the first comprehensive survey of bog bodies — a burial tradition they believe spanned 7,000 years — to build up a fuller picture of the phenomenon.

“We should not focus on just a few spectacular finds. It is really important sometimes as archaeologists to zoom out,” said Roy van Beek, an assistant professor at Wageningen University in the Netherlands and coauthor of the study.

“Sometimes, you have to be really careful that you’re not making conclusions or drawing conclusions too quickly, just based on a very limited number of sites.”

While bogs can be treacherous places in which it’s easy to get lost, meaning some bog bodies are likely those of people who died by accident, the team found that many deaths were deliberate — and brutal, with the corpses dumped or placed in bogs after death.

“In many cases, it’s not a coincidence that these people ended up in these bogs. Too often, violence is something that comes into play,” van Beek said.

The team were able establish the cause of death for 57 individuals, and in 45 cases violence was involved. The highest number of violent deaths appeared during two timeframes: from 5200 BC to 2800 BC and 1000 BC to 1100 AD.

Bone arrowheads were found embedded in the skull and sternum of Porsmose Man, a bog body found in Denmark. Similarly, Tollund Man, also found in a Danish peat bog, was hanged. Some historians believe he may have been a human sacrifice.

“People have always been inclined to interpret most of these as ritual sacrifices — that people were deliberately killed as offerings for higher powers,” van Beek explained.

While ritual violence and human sacrifices did occur, van Beek said there were likely many other explanations as to how the bodies ended up in the bogs.

The study divided the bog bodies into three categories: bog mummies, the most famous finds excavated with skin, soft tissue and hair intact; bog skeletons, complete bodies but with only bones preserved; and partial remains of either bog mummies or skeletons.

“The survival of human tissue also depends on how quickly a body is immersed in water, the temperature and time of year, and the presence of insects and internal micro-organisms,” the study said.

Examinations of the three types of bog body revealed that burying bodies in bogs was a deep-rooted tradition that spanned thousands of years. The phenomenon appears to have originated in southern Scandinavia around 7,000 years ago, and it gradually spread across Northern Europe.

The youngest finds, from Ireland and Scotland, show the tradition continued into the Medieval period and early modern times. The Iron Age and Roman era, from 1200 BC to around 500 AD, were generally perceived as marking the peak of the bog body phenomenon.

While most of the sites featured only one corpse, it wasn’t unusual to find bog body hotspots where the remains of multiple people were discovered, sometimes accompanied by valuable objects. One exceptional site is Alken Enge near Skanderborg, Denmark, which includes more than 380 individuals killed in violent conflict and deposited in wetlands along with weapons almost 2,000 years ago.

“These mires and bogs are generally known for their natural qualities … and high biodiversity. They are places where special plants, animals (live) and they are very important carbon stocks that protect against climate change,” said van Beek.

“But if you look at this type of research, we could say they are extremely valuable cultural archives as well, which yield really high quality evidence about human behavior for millennia.”