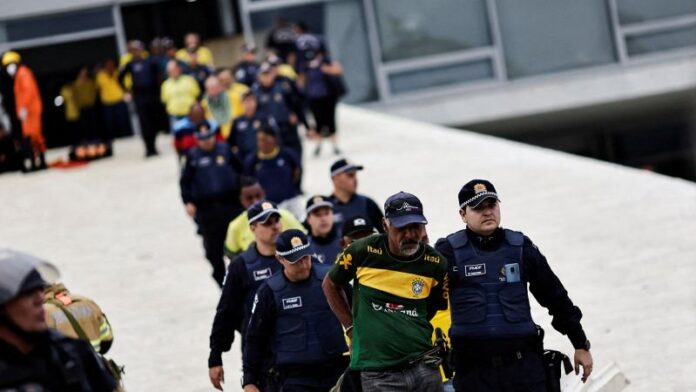 A vast majority of Brazilians condemn recent riots and invasions of federal government buildings, and more than half say former President Jair Bolsonaro is at least partially responsible for them, according to new polling.

Polling firm Datafolha released new figures Wednesday showing that 93% of Brazilians condemn the attacks on the Congress, Presidential Palace and Supreme Court buildings while only 3% said they supported the attack.

More than half of Brazilians – 55% – said Bolsonaro holds at least some responsibility for the attacks carried out by his supporters, while 39% say he cannot be held responsible.

According to the poll, 46% think that all those involved in the invasion should be imprisoned, while 9% say that no one should go to jail.

Regarding the handling of the attacks by the new government, 64% of those interviewed said they believe the government will control the situation from now on, while 29% think that da Silva will fail to do so. The telephone poll interviewed 1,214 Brazilians over 16 years old on January 10 and 11.

The fallout from the attacks continues this week.

“All detainees were identified by the Federal Police and will be held responsible for, to the extent of their responsibilities, for crimes of terrorism, criminal association, attack against the Democratic State of Law, coup d’état, persecution, incitement to crime, among others,” reads the statement.

And President da Silva has joined a growing chorus of accusations against Brazil’s security forces, as questions mounted as to how protesters were able to breach government buildings and wreak havoc inside.

“It is easy to see in the footage the police officers talking to the attackers. There was an explicit connivance of the police with the demonstrators,” he said. He also vowed to find out who financed the protesters.

Footage shared of the attack appeared to show forces standing by and watching protesters march into government buildings.

CNN has reached out to Brasilia’s Federal District Military Police and Armed Forces for comment.