Brazil congress attack: Everything you need to know 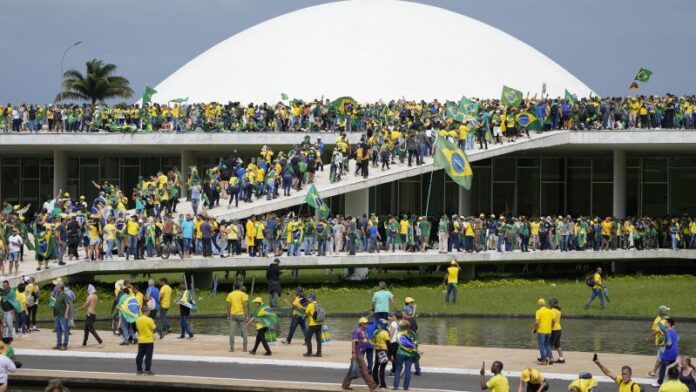 Brazil was reeling Monday after hundreds of supporters of the country’s former leader Jair Bolsonaro stormed the seats of power in the capital Brasilia, trashing offices and drawing condemnation from the government and the international community.

The breaches came a week after the inauguration of Lula da Silva, who returned to power after a 12-year hiatus following a victory over Bolsonaro in a run-off election on October 30.

The attack bore similarities to the January 6, 2021 insurrection at the US Capitol in Washington DC, when supporters of ex-US President Donald Trump – a close ally of Bolsonaro – stormed Congress in an effort to prevent the certification of his election defeat.

Here’s what you need to know about the events in Brasilia.

Footage Sunday showed massive crowds in Brasília walking up a ramp to the congressional building, where they had reached the Green Room, located outside the lower House of Congress’ chamber, Interim Senate President Veneziano Vital do Rogo told CNN Brasil.

Other outlets showed Bolsonaro suporters entering the Supreme Court and the presidential palace, where CNN Brasil showed the arrivals of anti-riot police and the Brazilian Armed Forces.

The floor of the Congress building was flooded after the sprinkler system activated when protesters attempted to set fire to the carpet, according to CNN Brasil. Additional videos showed protesters inside the building taking gifts received from international delegations and destroying artwork.

By Sunday evening, several hours after the breaches, the three buildings had been cleared of protesters, CNN Brasil reported. At least 400 people have been arrested, according to Federal District Gov. Ibaneis Rocha.

Those arrested “will pay for the crimes committed” Rocha tweeted, adding that they are “working to identify all the others who participated in these terrorist acts this afternoon.”

Hours later, however, Rocha was suspended from his post for 90 days by Supreme Court Justice Alexandre de Moraes.

A number of hardcore supporters of ex-President Jair Bolsonaro have been making their resentment of Lula clear since he won the October election, and those grievances have intensified in recent weeks, culminating in Sunday’s storming of Brazil’s democratic institutions.

Spurred by unfounded claims of election fraud, supporters draped in Brazil’s national colors and wearing the shirt of the national football team – both of which became central motifs of Bolsonaro’s campaigns – spilled into major government buildings, smashing windows and using furniture to form barricades against security forces.

But the events of Sunday did not emerge from nowhere.

Bolsonaro supporters had been camped out in the capital since his election defeat. Justice Minister Flavio Dino had authorized the armed forces to set up the barriers and guard the congressional building Saturday due to their continued presence.

A number of camps filled by supporters of the ex-president have also appeared outside Brazilian military bases, with some calling for a coup by the armed forces reminiscent of the two-decade military regime that ruled Brazil from 1964.

Dino said on Twitter on Christmas Day that those camps had become “incubators for terrorists,” after a man was arrested for attempting to set off a bomb in protest against Brazil’s election results.

In the months leading up to his election defeat Bolsonaro repeatedly sowed doubt about the legitimacy of the vote, without citing any evidence for his various claims. His effort to suggest that any loss was the result of fraud was immediately likened to his ally Donald Trump, who employed similar tactics during the 2020 US Presidential election.

After a narrow loss in the final round, Bolsonaro stepped up those complaints – but struggled to gain any vindication from Brazil’s regulators and institutions.

The head of Brazil’s electoral court on Wednesday rejected Bolsonaro’s petition to annul ballots, calling the outgoing President’s allegation that some voting machines had malfunctioned “ludicrous and illicit” and “ostensibly conspiratorial toward the democratic rule of law.”

And Brazil’s Ministry of Defense found no evidence of fraud or inconsistency in the electoral process in a report published in November.

Bolsonaro nonetheless refused to explicitly concede defeat in the vote, while also insisting he would comply with Brazil’s constitution during the handover of power to Lula. Ultimately, he fled the country on the eve of Lula’s inauguration, and has been staying in Florida since then.

Bolsonaro denounced Sunday’s actions in a tweet on Sunday, while equivocating their historic nature and attempting to draw comparisons with previous actions of “the left.” The ex-leader said that although peaceful and lawful demonstrations were part of democracy, “depredations and invasions of public buildings as occurred today, as well as those practiced by the left in 2013 and 2017, escape the rule.”

But despite his efforts to separate himself from Sunday’s protest, experts say Bolsonaro’s months-long campaign to sow doubt over the election laid the groundwork and ultimately encouraged his supporters to launch Sunday’s protest.

Sunday’s events immediately drew comparisons to the storming of the US Capitol building by supporters of Trump, almost two years ago to the day.

And like that event, the riot followed months of incendiary remarks from Bolsonaro about the legitimacy of Brazil’s elections and of Lula’s electoral victory. The two ex-leaders employed eerily similar playbooks before, during and after their electoral defeats, leading to concerns in each country about how robustly their electoral processes and democratic institutions would hold up.

Bolsonaro would complain about supposed “fake news” about his presidency, insist that polling showing him behind Lula was rigged or untrustworthy, and claim that voting machines used on polling day were not fit – all of which were also espoused by Trump.

Whereas Trump spoke directly to his supporters hours before the Washington DC insurrection, and then remained in his residence as it unfolded, Bolsonaro was not physically in Brazil during Sunday’s riot.

In both cases, the riots drew global condemnation and failed to impact the results of the election – in Brasilia, Lula had already taken office and there was no process for protesters to disrupt.

“I condemn the assault on democracy and on the peaceful transfer of power in Brazil,” US President Joe Biden wrote on Twitter. “Brazil’s democratic institutions have our full support and the will of the Brazilian people must not be undermined.”

In a news conference, Lula da Silva described events in the capital Brasilia as “barbaric” and said “a lack of security” had allowed Bolsonaro’s “fascist” supporters to breach barriers set up by the military outside the congressional building, the Supreme Court and the Planalto Presidential Palace.

“These people are everything that is abominable in politics,” he said, adding that “all the people who did this will be found and punished.”

Commanders from the military, police and the defense minister would be held accountable in court if the camps were not dismantled, Supreme Court Justice Alexandre de Moraes said, adding that all highways must be cleared on Monday.

Brazil’s Attorney General’s office (MPF) said it was investigating all involved in the breaches.

“The Attorney General of the Republic, Augusto Aras, monitors and follows with concern the acts of vandalism to public buildings that occur in Brasília this Sunday (8),” the MPF said in a statement.

Aras has also “requested the Attorney General’s Office in the Federal District (PRDF) to immediately open a criminal investigation procedure aimed at holding those involved accountable.”