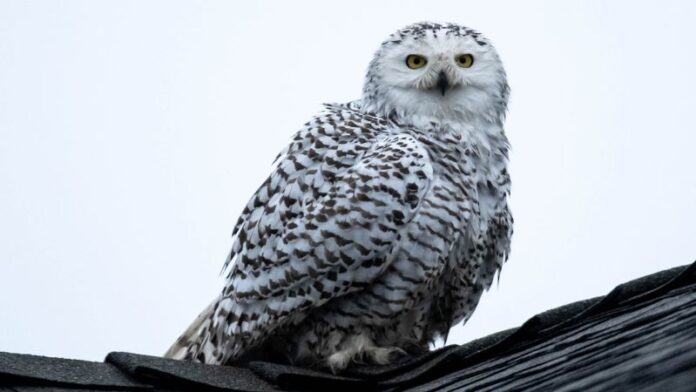 A snowy owl that looks like it should be flying about the wintry wizarding world of Harry Potter has been spotted among the palm trees of beachy Southern California.

Snowy owls are native to the Arctic tundra, where their largely white coats camouflage them in the snow, according to the National Audubon Society, which protects birds across the Americas.

“They’re most common in very, very North Canada,” said Jaret Davey, a wildlife technician and volunteer coordinator at the Wetlands and Wildlife Care Center in Huntington Beach, California. “The southern limit of their winter range is in the northern United States. So it’s not uncommon for them to be in Washington or Minnesota or Maine in the winter. But to be this far south is really exceptional.”

Residents in a neighborhood in Cypress, California — about 25 miles south of downtown Los Angeles — got a Christmas miracle when the owl first appeared in mid-December. It has been spotted every day since December 27.

“It’s astonishing to see a snowy owl in Southern California,” said Chris Spurgeon, program chair and member of the board of directors at the Pasadena Audubon Society, a local chapter of the National Audubon Society serving the Greater Pasadena area of California.

Spurgeon and Davey aren’t alone in their excitement. There have been hundreds of people admiring the owl some days, and some have traveled hundreds of miles, Davey said.

“In February … I flew to Manitoba (Canada), and then drove several hours north just to see a snowy owl,” Davey said. “It was 25 degrees below zero in northern Canada. I never thought I’d see one standing in my shirtsleeves on a suburban street in 70-degree weather.”

Snowy owls are classified as vulnerable on the International Union for Conservation of Nature and Natural Resources’ 2021 Red List of Threatened Species. There are fewer than 500,000 snowy owls in the world, which isn’t a huge number “when it comes to birds,” Spurgeon said.

“We could be vastly wrong with that number because they do live so far away from most people,” he said. “And unfortunately, many birds are threatened by climate change. With the changing conditions in the Arctic, it’s affecting them as well as everyone else.”

No one knows exactly why and how the West Coast snowy owl got to a place so far from its natural habitat, but bird experts have a few theories.

“Birds that migrate do occasionally do crazy things: go in the wrong direction, go too far, migrate at the wrong time of year, stuff like that,” Spurgeon said.

This can also happen if a bird is young and hasn’t migrated many times before, Davey said. The brown spots on snowy owls’ feathers usually get wider as they age, so the size of the California owl’s spots suggest it could have been born within the last couple years, Spurgeon said.

The owl could have hitched a ride on a passing cargo ship while flying across the sea, went all the way to a seaport and found itself back on land, Spurgeon and Davey said. It also could have escaped from being illegally kept as a pet.

“Oftentimes with really beautiful animals like the snowy owl, people will get them on a black market and then illegally keep them as pets,” Davey said. However, he said the owl did not appear to have a leg band, clipped talons or clipped wings that would suggest they had been kept in captivity.

When Spurgeon saw the snowy owl, it didn’t look emaciated or unhealthy, he said. But some birdwatchers did think the owl might have been experiencing symptoms of heat stress during the first couple of days, Davey said.

“It looked like it was breathing really heavy. Its feathers were all fluffed up to try to shed heat,” Davey added. “Since then, it seems to have been doing just fine.”

Southern California is relatively cold now, but the owl could be at risk when the weather warms up in the spring, Davey said.

With parks, open fields and grasslands nearby, experts think the owl shouldn’t have difficulty finding food during its stay. In fact, there has already been evidence that the owl has been eating well — in a pellet the owl regurgitated, staff at the Wetlands and Wildlife Care Center found a whole skeleton of what might have been a gopher.

“All owls do regurgitate small little pellets just of indigestible material because, unlike us, where (when) we eat a piece of meat we eat around the bone, birds of prey just eat the whole thing,” Davey said. “For the small little bones they can’t digest, they just cough it back up.”