Analysis: What Brazil lost after Bolsonaro supporters rioted in Brasilia 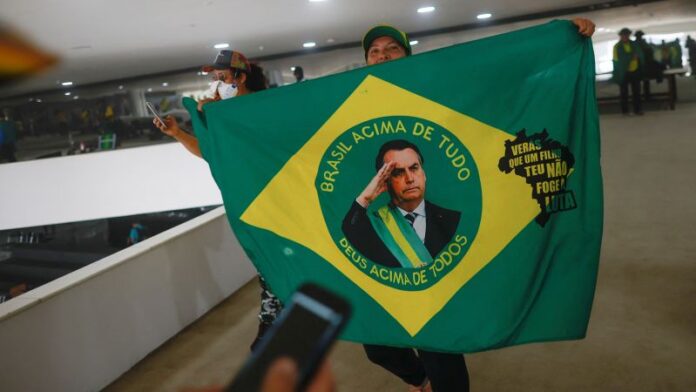 Brazil’s flag has a phrase etched in the middle of its blue, star-studded globe: “Order and Progress.” The same flag was omnipresent as supporters of former president Jair Bolsonaro stormed the nation’s capital, some donning it like a cape as they attacked government buildings, others using it as a towel to wipe away the tear gas fired by security forces to contain the crowds.

These ideals of order and progress were replaced by disorder and chaos Sunday. The events that unfolded in Brasilia were shocking and terrifying, but not surprising. For months, Bolsonaro’s right-wing supporters have held on to the false belief that the October 30 runoff election was stolen, and that President Luiz Inácio Lula da Silva didn’t win.

Bolsonaro himself never publicly accepted the election results, left for the US ahead of Lula da Silva’s inauguration on January 1, and has long sown doubt in the legitimacy of the electoral process and the country’s electronic voting machines.

“[Bolsonaro] has been stoking this for a long time, even before the elections. There are audits of the electoral machines, audits also by independent reviewers that confirm there was no chance for theft,” Christopher Sabatini, a senior fellow for Latin America at Chatham House in London, told CNN.

Bolsonaro has condemned Sunday’s riots, but Sabatini argues that the former president still bears some responsibility for the violence. “Quite simply, you cannot give your people the gasoline, the matches and then point them to the house and then claim that arson is not your fault.”

Brazil’s “house(s)” that suffered the damage were the Congress, the Supreme Court and the Planalto Presidential Palace, designed by famed Brazilian architect Oscar Niemeyer more than 60 years ago as a modernist utopia. Inside them, priceless pieces of art, including the mural “As Mulatas” by Brazilian artist Emiliano Di Cavalcanti and a XII Century pendulum clock belonging to Balthazar Martinot – gifted by France to the Portuguese King João VI – were destroyed.

The damage to the broken artworks is incalculable, said Rogério Carvalho, Planalto Presidential Palace’s curator – and the same is true on a political level.

The cost of what was lost goes beyond the destroyed buildings and relics; Sunday’s attack on the seat of government was an attack on the democratic values Brazil has proudly identified with.

Lula da Silva and the leaders of Brazil’s Congress, Senate and Supreme Court have signed a joint statement accusing the protesters of “terrorism and vandalism” and describing their behavior as “coup-like.”

“The country needs normality, respect and to work towards progress and the social justice,” the statement said. “We call on society to maintain serenity, in defense of peace and the democracy of our nation.”

But one of Lula da Silva’s main challenges may be finding that unity with some factions of the Brazilian Armed Forces, where former President Jair Bolsonaro cultivated loyalty. Many Lula allies have accused the military of being complicit with the right-wing protesters and have called on the President to dismiss his new Defense Minister José Múcio Monteiro.

The military has not responded to these accusations.

“President Lula has sought to project normality. That is of course rather difficult because there’s a lot physical damage that has been done to Congress, to the Supreme Court,” Oliver Stuenkel, professor of International Relations at the Getulio Vargas Foundation in Sao Paulo, told CNN.

“The big question is to what extent can Lula reestablish a trustworthy working relationship with the armed forces – a lot of people say perhaps he cannot fully trust the security establishments.”

Bolsonaro meanwhile may bear “political responsibility” for Sunday’s attacks, according to Justice Minister Flávio Dino, though he said there are no legal grounds to investigate Bolsonaro in connection with the riots at this time.

“Words have power and those words turned into hate, which turned into destruction … It is a political responsibility because there are political leaders who are responsible for the hate speech and the destruction that we saw yesterday at the buildings of the three branches of powers, aiming at a coup d’état,” Dino said during a news conference on Monday.

Still, some in the US and Brazil have already begun calling for the former leader’s extradition back to Brazil and have demanded answers for the disorder and chaos that was left behind after Sunday’s insurrection.