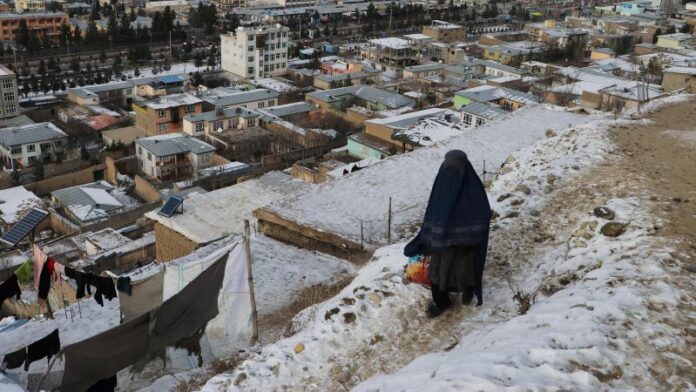 At least 78 people have died in freezing conditions in Afghanistan in the last nine days, a Taliban official said Thursday, deepening a humanitarian crisis affecting millions of people now living under the control of the radical Islamist group.

Shafiullah Rahimi, a spokesperson for the Taliban’s Ministry of Disaster Management, told CNN that along with the loss of human life, more than 77,000 livestock had also frozen to death in recent days.

Temperatures fell as low as minus 28 degrees Celsius (minus 18 Fahrenheit) at the end of last week with fears that conditions could get even colder. The temperatures are well below average for this time of year, with the coldest conditions recorded in the north, according to CNN meteorologists.

The United Nations Office for the Coordination of Humanitarian Affairs (UNOCHA) in Afghanistan said in a tweet Wednesday that livestock losses posed a further risk to families with more than 21 million people urgently needing food and agricultural support.

The Taliban takeover in August 2021 has plunged Afghanistan into an economic and humanitarian crisis.

Humanitarian partners are providing heating, money for fuel and warm clothes to families, but the distribution of aid has been severely impacted by the Taliban’s ban on female aid workers, the UNOCHA in Afghanistan said in a tweet.

At least half a dozen major foreign aid groups have temporarily suspended their operations in Afghanistan since December, when the Taliban ordered all local and international non-governmental organizations to stop their female employees from coming to work, or risk having their NGO licenses revoked.

Some of the UN’s most senior female officials have been meeting Taliban leaders in Kabul to discuss the ban on female aid workers, after the agency had to suspend some of its “time-critical” programs in Afghanistan due to the absence of female aid workers.

Women’s rights, freedoms and access to education have been severely eroded under the Taliban, which has recently barred females from accessing education.

Half of Afghanistan’s population is experiencing acute hunger, and while conflict has subsided, violence, fear and deprivation remain, a UN report in November found.